[Verse]
VVS hang on my stomach
Thooka on me 'cause I know it won't let me down
A silencer on it, when I shoot, it don't make a sound
Come to Lil Vegas, I bet he won't make it out, ayy
Draped designer head to toe
When I walk through the door
All these bitches wan' wipe me down
They ain't like when I broke, but they like me now
Niggas hatin', but his bitch wan' me pipe her down
Nigga see me, better shoot, ain't no talkin' out
AR-15 make a f*ck nigga walk it out, ayy
I'm the young nigga they talk about
What you gon' do when them thookas start sparkin' up?
Niggas always screamin' Hoodrich
But they broke than a bitch and they ain't got no money
They hollerin' pop up but they know how we comin'
Catch 'em in traffic, these niggas be runnin'
We catch 'em out lackin', you know that we dumpin'
Keep a thooka, that's the number one rule (Number one)
Keep a shooter, yeah my numbers a fool
Free Number 7, you know he gon' shoot
T-Slick just came home, my big brother a demon, tock out with the tool
You lookin' for me then I'm lookin' for you
These the same niggas I was whoopin' in school
Ayy, young nigga bossed up, they can't stand me now
Got a couple hundred bullets, I'ma hand 'em out, ayy
I was trappin' back then, I was trappin' now
Still hittin' licks while I'm rappin' now (Cutthroat)
He ain't 'bout that shit, he just talkin' loud
Hood Fame, stretch gang, we the slaughterhouse
Nigga play, send shots to his mama's house
Young nigga got more syrup than a Waffle House
Ten thousand grand Rollie, watch bust down
I ain't never had shit, young nigga got bucks now (Rich)
You cuffin' on that bitch, she a hand-me-down
Dropped out of school, now I'm rich, f*ck a cap and gown
p*ssy rapper, yeah I know you a sucker
Same nigga used to get fresh from my brother (You was broke)
These niggas can't hang with the gang
Put him in the game, he was lame so we cut him
Then my partner went and flushed him Got him for everything, why the f*ck would you trust him? (Why?)
You know he a robber, you know he a mobber
Hit him right at the store, bitch, don't come to the gutter (Lil Vegas)
HoodFame Yayo, nigga straight drop (Drop)
I'm the hottest nigga jumpin' out the crack pot (Me, bitch)
Talking on Facebook, boy, you must be 12 (Huh?)
Fresh out of jail and I'm givin' 'em hell
Straight out the cell and I'm back on my scale
You niggas know the rest, I know you done heard the song (Trap)
I'm a street nigga, me and rappers don't get along
Carbon 15 by my side, I ain't come alone
King of my city, my young niggas spinnin'
Send 32 shots at your chest, call you Karl Malone
All of that f*ck shit, yeah, you know that's what I be on
Count up a check and sip Tech out a styrofoam
That shit that you talkin', I done it
Play with this shit, it get ugly
f*ck the fighting, we ain't sluggin'
Bitch, I'm in the field like it's rugby
Come and get you and I pop at your buddy (Ayy)
Check out my chain, that bitch flooded, ayy
You niggas ballin' on budget (You broke)
Sippin' OG and it's muddy (OG)
My cup is red like it's bloody (Blood)
I don't want your bitch, I just f*ck her than I creep out
Gotta watch my moves 'cause the laws tryna peep out (f*ck 12)
Good dope rolled, junkies can't keep out
Boy, your diamonds don't glow, lil' bro, you went the cheap route
Try to put a lease on your ho, I made her sleep in
Your bitch chose me, I'm the one to bring the freak out (Freak)
Make a diss song, get popped if you leak out
I'm HoodFame gang, niggas know what we 'bout (HoodFame gang)
Gotta be shittin' me (Gotta be)
Go Yayo a p*ssy? Lil' nigga, must be kiddin' me (Huh?)
Claimin' y'all whoopin' me (What?)
Touch Lil Yayo, bitch, I'm catchin' a first degree (Murder)
I'm talkin' 'bout literally (For real)
Pop up on 'em, light 'em up like a Christmas tree
Big ole thooka put him out of his misery
Ask me who did it, don't know, it's a mystery (Don't know) 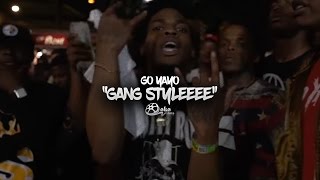