Drug-crazed and ravenous, Digestor, Fermentor, and Cremator go on a rampage through Creepsylvania, devouring everyone in their paths. From his palace the Basilisk watches and waits...

On the outskirts of town
Heard the townsmen a curious and terrifying sound
As they crept forth to see
A gacked out Fermentor, Cremator and me
We surrounded them axes in hand
They’d do nicely chopped up in the meal we had planned
At the front of the crowd cried a priest
"Look away! It’s unholy, it’s ghastly, it’s a..."

As the townspeople panicked and fled
Fermentor got a sickening idea in his head
In the mood for some dubious snacks
He splintered their skulls with a swing of his axe
We siphoned some petrol from a car
And the orphanage was turned into a flaming abattoir
Tiny skeletons radiating heat
Young flesh is the best when it's eaten at a...

Lazily licking at a stump
Sticky high fives as the bodies were dumped
Crawling on the ground like slugs
Bloated with meat and a mountain of drugs
Suddenly a net was released
Dragged off in chains by the Secret Police
In the belly of the beast
Locked in a cage like the victim of a... 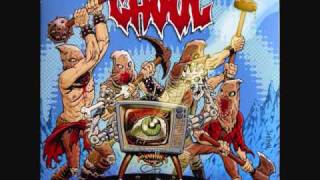