Grey*59, dollar sign-uicideboy-dollar sign
Figured out a way to make these dollars mine
Picked up two from Dallas, one from Phoenix, two from the Bay
Got 'em signed, trip 'em out and get paid
If someone tryna to harm me, stick with the blade
Tired of pickin' bullets out my spine
Pull up, we shoot it, let it bang
Shoutout my motherf**king army
Shoutout my broken mental matching scars (Ayy)
Three sixes in my heart (Ayy)
Squeeze bliss out of my heart (Ayy)
Until I see these schemin' f**kboys thinkin' that they hard
No one talkin' 'bout Percocet?
But I'm still here on Percocet, y'all heard of us yet?
Them two white f**ks from either side of the river
Y'all keep my name in your mouth when you think you're bein' different, uh

[$CRIM:]
Thirteen hours 'till I land, need me more than half a xan
Grey Gorilla out the f**king coupe, finna pull up to the zoo
Who the f**k is you? Matter of fact, f**k you, homie
Tickety-tock, go to clock in, your time's up
Call it bad luck
Gotta have a few shared times if you share mine
Got my ass whooped, got my ass stomped
And back in those days, couldn't pay a f**king bill
Now I chill with Dana in the motherf**king hills
Every time I hit Cali, where the f**king dro?
Looks deceive you, homie, and I'm feelin' real low

[Germ:]
Hold up bitch, hold up why you trippin', jit?
Hold on, I got bones to pick
This North Face hold the coldest shit, whoa
This that full blunts and over
In my lung when I blow
Broken hearts if we smoke yeah, wet, wet
Go 'head do your dance when that TEC bless you, best bet
You ain't speaking on the demon, why he sleeping? Neck, neck
I be on the missions every weekend, holy shit
Slipped my mind, a bid for my children, f**k 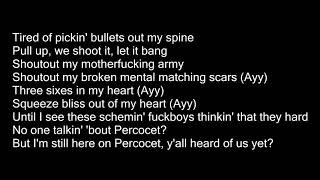