Gandalf's self-titled album has some attractive baroque-
psychedelia with a spacey air, though its quality depends
very much on the standard of the material. Generally
they're better the more they rely on the slightly weird
and spacey production, as on "Scarlet Ribbons" and their
cover of Tim Hardin's "Hang on to a Dream." On tracks
like "You Upset the Grace of Living" there's a nice
balance of melody and quasi-classical keyboards on the cusp between pop, progressive rock and psychedelia. "Can
You Travel in the Dark Alone," one of the few originals
(by Peter Sando), is nice, harmonic sunshine pop with a
slightly experimental feel, along the lines of some of
the better things being done by Californian cult figures
like Gary Usher and Curt Boettcher at the time. Other
selections are nothing special, however. — Richie
Unterberger 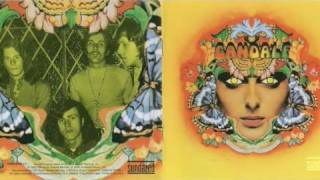