Ya Heard
Game
The Game Intro No More Fun And Games Like Father, Like Son Intro Hate It Or Love It Dreams Don't Worry Don't Need Your Love Church For Thugs Westside Story
Ya Heard video


[The Game]
You see that cherry red Phantom on them big ass wheels
You see I be playing with them cars, I'm like a big ass kid
Crazy with that cap gun, so if we play cops and robbers
I'll show you how to pop revolvers
Fitted cap too big, so it cover my eyes
That lambo? That ain't shit, just a public disguise
And that top model chick, she for the diamond lane
And I be driving all crazy cuz my diamond chain is (bright)
As them Las Vegas lights
it be the same in California when I'm riding at night
In New York, I be in Midtown, up and down Broadway
Having meetings all day, baby my future is (bright)
As Lebron's, take off on anybody
Tyra Banks on my arm, and we'll crash any party
Yeah, making it rain, ain't got shit on me
The way I ball, the f*ckin owner should come sit on me
Yeah, I'm fresh out of jail, you shoulda knew I was back
Turn on the radio it's a rap

[Ludacris]
[Talking]
Just touched down at L.A.X. LUDA!
That's Right! What up Game? Fresh out huh?

Don't you hear it? That nigga named Luda
Slicker than Rick the Ruler, whoop ass like Lex Luger
My money long, your shit is shorter than Oompa Loompas
And I'll superman, yuuuh, that ass like Lex Luther
Shoot you then say me gusta, I'll take you to meet ya maker
My dick's the Staples Center I'll take you to see the Lakers
Swoosh! On that Cali kush, smoking like a muffler
So many red flags I coulda swore I was in Russia
Game! I got the fame and the fortune, Compton is scorchin Get rid of bullets, my gun keeps havin abortions
I ain't havin it, see em in the dead zone
Fake dope boys is more bass up in my head phones
Adjust your treble, I'm heavier than metal
My verses are hot as shit like I recorded with the Devil
I'm on another level, they stuck on the elevator
And I'm about to blow this bitch, Game press the detonator, like
Fresh out of Georgia, ya heard I was back, turn on the radio, it's a rap

[The Game]
See I'm come from the bottom and they call me The Game
But I'm just happy that Beyonce know my name
I took that Dr Dre money and I bought me chain
Then I bought me a house, then I bought me a Range
Then I bought me some p*ssy, then I bought me some brains
But I ain't buyin' that the best rappers is Kanye and Wayne
See both of them niggas spit, but yall act like you don't hear me spit
Like sellin' 7 million records ain't the shit
I don't win no Grammies, nigga I'm too gangsta
And poppin Cristal with Irv don't make me a wanksta
See I'm California certified, my niggas make the murder rise
Readin my fan mail in jail, Buck told Curtis bye
So I'mma break it down for them niggas in the South
Slow it down but this Rolls Phatom
grill in my mouth
Throw the Prada slippers on, when I walk in my house
P Diddy and Tommy Lee know what I'm talking about
See, I'm fresh out of jail, you shoulda knew I was back
Turn up the radio it's a rap
Explain lyrics
Correct lyrics 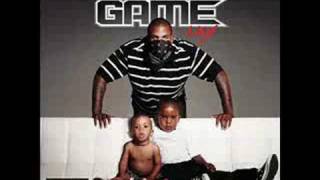