[The Game]
I'm from the old hood, somethin like yo' hood
Where niggaz don't know good, or know Suge, but the blow good
So we rock it like Tracy McGrady
Send it to Houston in a gray Mercedes
I'm a product of my environment, grew up in the 80's
So that mean, me Kanyeezy and Jeezy all crack babies
And it's evident my flow is heaven-sent
First LP, on the same shelf as the veterans
Nigga I can't be f*cked, like a lesbian
I'm to hip-hop what Cartoon is to Mexicans
I'm a artist, never claimed to be the hardest
Just number one since B.I.G. and 'Pac departed
Nate ridin with me, Snoop ridin with me
All you other niggaz used to be good like Ken Griffey
I'm on fire like the tip of a blunt
On fire like a nigga that let it drip for a month
I'm a Blood, you can Crip if you want, just let it bump
like you got Scott Storch tied up in the trunk
I'm the ice cream truck man, guns in the trunk man
Drugs in the trunk man, call me the front man

[Chorus One: The Game]
Too much Cris' in the club not to get drunk
Too many bitches in the world not to f*ck
Too much chronic in the studio not to roll it up
And too much bass in the trunk, so let it bump

[Chorus Two: Nate Dogg]
You look like you mad as f*ck, but who cares?
Grabbin her by the arm, cause she stare
Don't know how much atten-tion you pay
You better be ready to die, in this game

[The Game]
I thought I told y'all
I'm done with the beef clown, my son three now
And I've been watchin Dre so long I'm makin beats now
Game on the rebound like Ben Wallace in the D-Town
I mean Chi-Town, f*ck it it can go down
Nigga I spit the whole round, fo' plus fo'-pound
Nigga this the wild wild West, call it a showdown And I'm Billy the Kid 'til they split my wig
I come back from the dead, tell 'em kill me again
Put my head on the barrel, dare a nigga to shoot me
I'm gangsta, took more shots than Tookie
I'm alive, so I'ma take a Patron shot for Tookie
Roll a California blunt and keep watchin the movie
Inspired by this gangbangin shit since I was two
I brought the West coast back, what the f*ck you do?
I'm the ice cream truck man, guns in the trunk man
Drugs in the trunk man, call me the front man

[The Game]
Drive fast, both hands on the dash
Close both of your eyes and hope that you don't crash
It's lyrical homicide, both airbags out
Roll the f*ckin windows down, let the bass out
Niggaz - drop the top on whatever in
Bitches - let your ponytail blow in the wind
Inhale the chronic, blow out dollar signs
Nigga you can drive a Bentley if only in your mind
Four doors, leather and wood
Ride like I got a horse stable under my hood
And I keep a chrome fo'-five under my hood
So if I die, nigga bury me under my hood
Who had the hottest bitch in the game, wearin they chain
Mr. H to the Izzo, Nas and Hurricane
Long as my family straight, read this at my wake
I gave 'em "The Documentary" and they scraped the plate
Twenty magazine covers, nigga look at his face
I can not, will not ever be replaced
I'm the ice cream truck man, guns in the trunk man
Drugs in the trunk man, call me the front man

[Nate Dogg]
He wolfin a lot of shit, he look scared
You can't find your girl, she right here
I'm not a bad dream, I'm a nightmare
'Sides there's way too many hoes in here 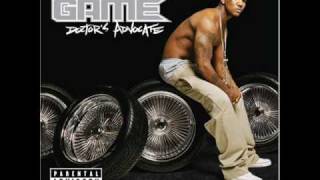