Back on the block, nigga, chains on the rocks, nigga
Used to move yey, I should throw up the roc, nigga
Back with the rocks, so I just throw up the mag
2 fingers: now get the ski mask!
This is body bag shit, that open the bag spliff
Open your lungs, a muthaf*ckin monster is what I've become
? hotter than pablo escobar's stove
Got the? queensbridge escobar flow
Brat! brat brat! 50 rounds'll knock you niggas down
Ben affleck from the town. this is my town nigga
King, mayor, all that. niggas better fall back
Bullets in your ballcap. p-u-s-s-y: that's what I call cats
Hardcore, die today if it brought biggie smalls back
Eyes low, 75 eighths, black war hat
Red album, bitch, everything else all-black
Eyes low, 75 eighths, black war hat
Red album, nigga, everything else all-black

Niggas better break bread and niggas better fake dead
I step in front of the beam and take it off of dre's head
Everything's straight red: my bitch, my car, the tip of my cigar
My philly match my scarf
Y'all niggas pushing light weight
Ryan russell niggas falling down, tryna put a hand up in my face
The f*cking music's in danger, ain't a mic safe
Mick bibby, mick vick, nigga, mike jake 4th album, cause I do my shit the right way
In life? the fans gon wait, so have a nice day
I'mma have a nice bitch sitting in the white 6
Coldest rapper alive: I write with an ice pick
And I'm white sick, meaning that my bars I'll
f*ck the world up, nigga, I'm an oil spill
In the 4-wheel, paint job orange peel, not like picasso, bitch
But I draw steel

I ain't never gave no f*ck, why would I start now?
Everytime I get on the track, it's black hawk down
I declare war, pulling niggas' cars now
And I ain't gotta f*ck sarah palin to lay the law down
Birds: knock em all down
You could push a ford now
Used to ball like chris paul, I'm john ward now
Still bang dogg pound, I don't like how y'all soon
Nothing but a nigga in the real, try to floss now
I set the bridge on fire - try to cross now
Still f*ck benzino, I don't care who run the source now
I got magazines inside of magazines
Woke up, laid everybody on the porch down
Kill the drums, the track is a corpse now
Spread my fingers when I chew? from georgetown
Think it's a movie?
But if it ain't a?
I'm busting with the 4 pounds 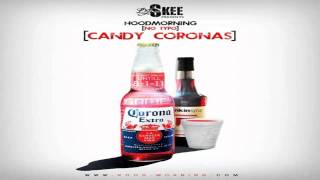