The Streetz Of Compton Lyrics

The Streetz Of Compton Lyrics

[JT]
G-Man Stan, yeah mayne
I see you done put together one of them tracks mayne
Let me get on down here to the C-P-T
Better known as Compton mayne
Get my young homey The Game, y'knahmean?
Young nigga up outta Compton mayne, y'knahmsayin?
This 2002, we gon' see what it do mayne
Y'knahmean? Yarra

[The Game]
Now everybody wanna know the truth about a nigga named Game
I come from the hub and every ghetto ain't the same
A lot of people already know exactly where it's at
Cause it's the home of the jackers and the crack
(Compton!) Yeah that's the name of my hometown
I'm goin down, in the town, where my name is all around
A nigga just be hatin and shit, that's a pity
But I ain't doin nuttin but claimin my city

[The Game]
See my lyrics are double or nothin provin to suckers I can throw 'em
Pass the natural 10 to 4 and six-eight before I go
Not really into freestylin, or tryin to promote violence
But they gotta know about the five-five-fo', so
That's how I'm livin, I do as I please B A young gangsta put in work on these Cali streets
And everybody know, that you gotta be stompin
If you're born and raised in Compton

[The Game]
Nowww Compton is a place, where all my niggaz chill dog
'til I found out, the streets get real dog
'Bout a year ago, somebody musta wanted me to die
Cause they kicked in the door, and gave the young kid five
They musta thought that I was gon' play the bitch role
Cause I lived through fo' five six holes
But I ain't goin out like no faggot-ass clown
They found, they couldn't keep a gangsta nigga down
So here's the burner in your face motherf*cker silly sucker
ass clucker now you're duckin cause you can't stop a Y.G.
Gangsta, cause I'm true to my game
You're lame, and thangs ain't gon' never be the same
Cause a nigga like the Game is takin over
I really don't think I should have to explain
Oh yeah I'm a dog but my name ain't Rover
And I'm the kinda nigga that's feelin no pain
Sometimes I have to wear a bulletproof vest
Because I got the C-P-T style written across my chest
A gangsta motherf*cker never ceasin to impress
My name is young Game so you can f*ck, the rest
I'm comin like this and I'm comin directly
Cause niggaz gettin all stirred up, I'm doin damage quite effectively
Rhymin is a battlezone and niggaz can't win
Cause I'm a gangsta from the C-O-M-P-T-O-N 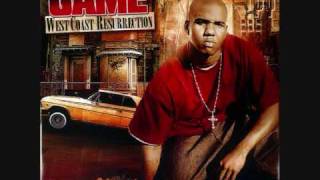