[The Game]
Death before dishonor
Ride with weap' up, cause niggaz tryin to dent my armor
Cold streets, Telly Mac keep the guns on 'em
They wanna know how that nigga from California
could run up on ya on any corner
Put somethin on ya
How I stuff bricks in the 6, with no crack aroma
Dawg, I'm just livin for the moment
I'm from Compton homey, but I'm like a center for Milwaukee
Cause I play for the Bucks, and I keep the 40 on me
Gotta keep the chrome-y, gotta keep my back to the wall
Wait for Q to rock me up, like cavi dawg
Speakin of lle', I put 8 in, 10 jump back hard
And watch my money come back, like Jordan in charge
I'm like the black Yankees, they don't want me around no more
Cause I hold the record for the most fiends roamin the boulevard
And when I'm on the boulevard, catch me behind the wheel
of that new Escalade with the Foreman grill

[Telly Mac]
Aiyyo I do this shit from Compton to the Mac block
High-tech collaborations with the Gamblaz and Blacksox
Drillin 'em killin 'em if we ain't feelin 'em nigga
If Sticky Fingaz need some music straight stealin it nigga
Shinin, in big trucks, big will in it nigga we climbin
To the top and we sealin it nigga
So back the f*ck up, my niggaz act the f*ck up
So keep yourself in line or you could get smacked the f*ck up Jacked the f*ck up, beat up bad and clapped the f*ck up
Wrapped up in white sheets and threw in a white truck
Over presidents, now you willin to give your life up?
Put your kids on the line, and give your wife up?
Over presidents, they got you soulless
So take this bomb and hold this, while we control this
For the streets, we comin with heat that's stolen
And we hustle universal, for that paper that we foldin
Roll in 600's, Beemers and 'llacs
We a team of cats, with the pens and gats
That fiend for jacks, but only when the green's attached
We fiend for jacks, but only when the green's attached

[The Game]
It's Telly and young Game the hustler, ho juggler, coke smuggler
No matter what the hustle, dough doublin
Lle or the rock, give me a day and a spot
And I bet I'll come back with 10K in the drop

[Telly Mac]
I'll stay in the spot, wearin a crop and coppin ounces
Telly Mac and Game the hustler, we rock the house
And plus we the reason that the blocks is out
So my words to the wise is just watch your mouth

[The Game]
And you don't want it when the stainless out, what the game about
The bullets is in, your brains is out
All over Frisco and Compton dawg, we ruthless
And the truth is y'all niggaz can't stop us dawg

[Telly Mac]
So why the f*ck you wanna knock us off
Like we some high-powered cowards and y'all really the niggaz that's soft
Still across the train tracks, we turn 'caine crack
It's Telly Mac and Game the hustler, you can't change that 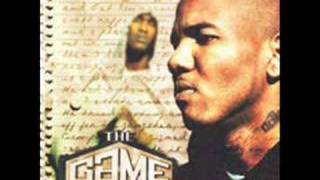