I went down one of them Bodaga shits right there in Harlem
Got me a bootleg Lloyd Banks and Young Buck CD
Took that shit home, put it in my boom box
Thought I was 'bout to be on some radio Raheim shit
Man that shit sound like some Vanessa Williams '88
I mean Olivia cute but they say that bitch a man
So this Black Wallstreet for life now
GGG-UNOT!

Pull the brim low, if they don't get it
Bentley Coup on gold daytons, I was the first one with it
Four times platinum, I done been there and did it
Came in the game and shitted, then wiped my ass with it
They say the Lord Givth, if Lord take it away
So I build a house on top of Hip-Hop, I'll wait for the day
niggaz hating on me, they don't want Jayceon to play
And the DA waiting on Jayceon to make a mistake
So they can put me in the SWAT car and lock me away
Give me a odd job in the pen for minimum pay
Let me out so I can drive down criminal way
Pushing the rock, nah this ain't no subliminal Jay
The summer too hot, and I want the winter to stay
'Cause I'm a cold nigga when I put the pen to the page
Similar to them shells going into my gauge
I hand 'em off to Dre, he turned them into grenades
And Just Blaze, 'cause the boy got game
Like I close my eyes, and woke up in a Roc chain
Now back to reality, my gun and my vest
And if diamonds are forever, then I'm Kanye West
Take a look at my chest, a hundred thou wet Jacob
Whole crew got chains, a hundred thou can't break 'em
And the flow is hot like that wit Satan
And the only thing I got spinning is Daytons
The hotter I get the more willing to snake 'em
So soon as the beat drop, watch where I take 'em
Compton Swap meet, to get me some All-Stars
When Game in the house, they they calling all cars
'Cause they heard about what went on in D.C.
Heard about Hot 97, my beef with 50

Now tell me do he got a conscience?
I think not, 'cause if he did I wouldn't be involved in this nonsense
Wouldn't be in Harlem, wouldn't be at this conference
I'd rather be pushing rock, like ??
50 whispered in my ear, like we still bonding
We ain't friends, I'm just acting like Charles Bronson
Middle finger in the air, one hand on my Johnson
Hip-Hop police on me like I'm the convict
What happened to the old school? I thought it was rhyming
Doug E. Fresh and Dana Day on the corner like Common
Now that ain't common, it's more like Top Ramen
The flow is noodles, I throw it up like vomit
And I still shine like diamonds
They kicked me out of G-Unit and I rebounded like Rodman
It's still Aftermath, two feet in the paint, shit
I be mad, I ain't, I'm supposed to stop I can't because
I'm in the hood politican, Impala liftin'
And I keep a black .45 on the side of my prada denim
Chip on my shoulder like I'm fresh outta prison
Dollar vision, blow a hundred thou like my wallet missing
Then re-up like Kim before the d-cup
Continuously getting money with my feet up
Chasing the throne, here my black Air Force
I said f*ck Benzino and got the cover of The Source
Feel me? If not then I guess you gotta kill me
But you ain't gon' do that so muthaf*cka move back
While I do B.I.G. and 'Pac impersonations on two tracks
When I wake the dead, everybody remove hats
We miss ya'll, can I get a hand clap?
Now back to rap, why I gotta stay strapped?
On that murder T-I-P, kill you ASAP
They won't know which hole to patch up, when the 'K' clap
I tried to spare you Young Buck, now it's time for payback
It go, how you from Cashville but you ain't got no cash nigga?
Say my name now that's your f*cking ass nigga
Kept your mouth shut and I gave you a pass nigga
Now I gotta lay you down like the last nigga
Buck, buck, buck from my AK-47
This nigga playing with his life, I might have to put him in heaven
Tryna play the game, talking shit up on the stereo
Prepare for burial, it's when I'm reincarnating Harry-O
And you don't want that David 'cause you love your life
Get my Vibe, when it's war he pull out butter knifes
Motherf*cker I'ma show you who the gangsta
All you do is Murder Inc., now who the wanksta?
When Suge had you, you were stranded on Tha Row
Juve left you for dead and went back to the NO
50 heard you on the tour bus and felt your little flow
Then he made you temporary replacement for Yayo
You a bitch, and that's hard to swallow
And you got robbed for your spinning G-Unit chain in Chicago
I call my nigga Jojo to get it back
He had the shit in his hands, and you ain't had the ten stacks
Picture that, I thought we was G-Unit
Then you ran and told 50 that I did that shit
Ask C-Murder, the boy ain't hard to find
I told Monica when I catch him The Boy is Mine
Take one shot of Brandy and pop
Watch his panties drop, when I run inside the Candy Shop
f*ck you, 50, Banks, Yayo, and the cops
And Olivia, I mean for a man she hot
Now I'm running out of breath, like I just beat boxed
Got 20 bars to go, lay it down like sheet rock
Don't worry about the flow, the boy know he hot
Hurricanes in store November, nigga f*ck Reeboks
I'm fly like a Hummingbird on a tree top
The new Hov, the new B.I.G., the new 'Pac, I need three spots
280 in, ain't no getting me back
I'm yelling f*ck the world, on my victory lap
Remember first it was Buddens, then it was Bleek
Now it's whoever motherf*cker, yeah, who want beef?
Now whenever motherf*cker, who wanna see me?
In the coffin, body exhausted, resting in peace
You don't want war nigga, you want peace
So give 'em the peace, capiche (sp?)
Let 'em rest in peace
From west to east the flow is outdatable, irreplaceable
Lyrical homicide, hell is hot, I'm boxing with Satan
And I slipped 'em the ace, you cannot replace 'em
If Eazy ever decide to return, I remain Jayceon
A king in the making, and the throne is for the taking
So I climb the mountain top and put my stake in
Got the weight of the world on my shoulder
Not a nigga nor a hood rat bitch can stop me from taking it over
This is crack music, go get the baking soda
300 Bars and Running, nigga the wait is over
I'm gone gone gone gone gone gone gone gone gone gone gone 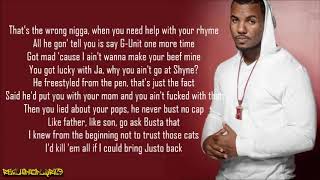