[Verse 1]
We was young rebels, renegade heavy, war ready
Niggas wanted our respect 'cause they old
I'ma get it on my own, I ain't one to mold
We like, "Why be under niggas when we know they hoes?"
Had they back out selling coke, man, I know they told
I ain't get enough supply and I oversold
We was posted with the siege 'til the cells came
Get the bundles out the fridge now I know they cold
I be all over the bread like provalone
I been balling so hard now my shoulder blown
Get it back, I'm in the trap house, overlong
All the Ziploc bags and the soda gone
Niggas go on missions, mindset on going home
Then they don't have no idea why it's going wrong
If you out here with the squad then be smart with 'em
Don't play no part in it, you ain't got your heart in it
Couple niggas killers on them prison yards with it
Shooting hammers in them cars with a broad in it
What you thought she was gon' do for ya?
Not time or support, nigga, she ain't waiting two for ya
She ain't come through on the books with the loot for ya
You go to trial, she won't even buy a suit for ya
Win or lose on that verdict, it's the finals nigga
Pick a bitch 'cause that jury ain't 'gon root for ya

[Verse 2]
I know that I was destined
Ain't no coincidence, I know that I was blessed with
Too intelligent, I know I ain't to mess with
Rob me if you desperate, sure to get your chest hit
I be to myself just tryna get a check 'cause
Everybody else just pussy boy infected
Now my family and real niggas feel neglected
But I feel like if they love me they gon' respect it
Money on my head, how? I ain't get the message
Glass restaurant with my bitch eating breakfast
If you starin' too long, I ain't second guessing
How long you think it take to up this bitch, just a second
Hating on a nigga 'cause your bitch and him were sexing
Still got the hoe home, tryna get her pregnant
Mad at the world 'cause you hiding your affection
Worst thing of all, kill a nigga 'cause he flexing
Let a nigga flex, mad 'cause we rich
Mad and you sick, really on my dick
You know me as G Herbo, worry me 'bout shit
Turn up my flex a bit, have another fit
Curry on my hip, get hit 'bout your lip
Filled with hollow tips, that's just off the rip
Glizzy got my palms all sweaty off the grip
Fingertips sticky, I just rolled up a zip
Boulders and shit, I was like twelve
Cuz told me, "You will learn more the older you get"
Soldiers and shit, I was in the field
That's the reason I be rapping all soulful and shit
Load up the whip, this one for my niggas got hit
Pulling up top, hold up the clip
This some whole other shit, living like this
Have a nigga 25, looking old as a bitch 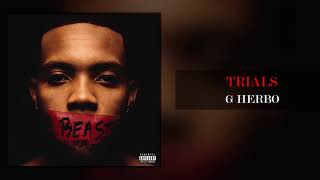