Let's follow the tracks to a world of pain
Where total madness enters the veins
As the arm extends the needle goes pop
It's self suicide ant it can't be stopped
A bundle a day a Ben Franklin binge
Those who sold their soul live by the syringe
Always on the hunt looking for a fix
Hate to be the one caught up in the mix
Begging like a fool fiending to be saved
They made their bed in wich they must lay
No excuses, no excuse! 2x

Glorified, all that was not pure
Horrified, as death was the cure 2x
Let's follow the tracks infested with scars
A deadly path where most die hard
Taking a chance injecting love
It's the only thing that gives back hugs
No self respect the head it nods
Praising a high just like a god
They eyes are pinned the nevers get tamed
Now the poison settles it's claim
As the body aches the blood it curls
In the darknees blaming the world

No excuses, no excuse! 2x 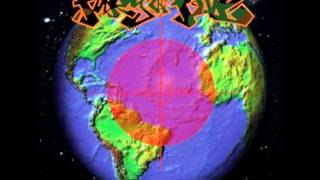