Yo, I got no license, two cars but hey
Yo a GS gray, and a CLK
Never, [unverified] so it can lead my way
My first, album was dope but ain't, get no play

We smoked out, with them MLX's
I'm underground but I sold records, for you SoundScan freaks
CNN, yeah, this is like our 60th week
Yo Flex, you got the Jeep but now you gettin' the peep

Me and you goin platinum, 'cause you f*ckin' with me
This is the final chapter, you told me, volume three
Yo, come through, eat niggaz like you
And tell them bitches in the back, that we wanna f*ck too

We at the Mariott, meet us at, 12:02
N.O.R.E., Flex and the Punisher crew
We gonna do it for the ghetto, and the families too
'Cause if I had friends, I wouldn't have a two door Benz

I, be on some deep shit, only coppin' cheap shit
Thinkin' long term, not thinkin' on some weak shit
I don't trust, no one now, cause they hate me
Everybody known to snake me, cornflake me

Lately, I concentrated, on my decision
I promised myself, I'd never go back to prison

Yo Thug Brothers
Deeper than blood, my peoples is bugged
We keep two and slugs, under deep in the clubs

Yo Thug Brothers
Big Nore and Pun, we're warriors from
The glorious and most notorious slums

Yo Thug Brothers
Thug shit at heart, we bugged from the start
Rugged and smart, f*ck it who want it, it's sparked Yo Thug Brothers
Jess West, Pun from TS
Yo Funk Flex, Noreaga [unverified]

You brave in the heart, playin' a part amazingly smart
Razor sharp, futuristic raps, state of the art
Takin' New York cats past the start
First it was Nasty Nas then watch me turn a apple into Macintosh

Computer chip, locomotion flow, [unverified]
Tote the toast on low, business never personal
Just some words to know, if you from the streets, come in piece
Or leave in pieces, even Jesus was killed by the polices

They crucified him now they inject us refuse to fry 'em
The pendulum state of death is my fate, cool I'm dyin'
If that's my destiny it's meant to be, just remember
To bury the motherf*ckin' that bent me right, next to me

Aight crew? Aight then
(No doubt Pun)
Let's fight then, I'm hype blend, comin' with the thunder
And the lightening, inviting the comp, ice on the arm
Nights on the storm, put knifes in your moms, right up in the Bronx

Mic in the palm, it's the Ghetto God
I tear a nigga heart, out his frame, when I scream, Terror Squad
We larger than life, my initials carved in my wife
She'd share to starve on my diet, understand I'm like God in her eyes

The father of Christ, get a mere mortal
Blessin' beer bottles by the dozen with Nore, it's brothers thuggin'

Yo Thug Brothers
Thug shit at heart, we bugged from the start
Rugged and smart, f*ck it who want it, it's sparked 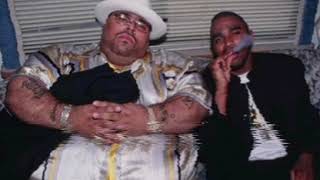