Ballad Of The Alamo Lyrics

Ballad Of The Alamo Lyrics


In the southern part of Texas, near the town of San Antone,
Stands a fortress all in ruin that the weeds have overgrown.
You may look in vain for crosses and you'll never see a one,
But sometimes between the setting and the rising of the sun,
You can hear a ghostly bugle as the men go marching by;
You can hear them as they answer to that roll call in the sky:
Colonel Travis, Davy Crockett and a hundred eighty more;
Captain Dickenson, Jim Bowie, present and accounted for.

Back in 1836, Houston said to Travis:
"Get some volunteers and go fortify the Alamo."
Well, the men came from Texas and from old Tennessee,
And they joined up with Travis just to fight for the
right to be free.

Indian scouts with squirrel guns, men with muzzle loaders,
Stood together heel and toe to defend the Alamo.
"You may never see your loved ones," Travis told them that day.
"Those that want to can leave now, those who'll fight
to the death, let 'em stay."
In the sand he drew a line with his army saber.
Out of a hundred eighty five, not a soul did cross that line!
With his banners a-dancin' in the dawn's golden light
Santa Anna came prancin' on a horse that was black as the night. Sent an officer to tell Travis to surrender
Travis answered with a shell, and a rousin' rebel yell!
Santa Anna turned scarlet. "Play deguello," he roared.
"I will show them no quarter. Every one will be put to the sword!"

One hundred and eighty five holdin' back five thousand.
Five days, six days, eight days, ten; Travis held and held again.
Then he sent for replacements for his wounded and lame,
But the troops that were comin' never came, never came, never came.
Twice he charged, then blew recall. On the fatal third try,
Santa Anna breached the wall and he killed them one and all.
Now the bugles are silent and there's rust on each sword,
And the small band of soldiers lie asleep in the arms of The Lord.

In the southern part of Texas, near the town of San Antone,
like a statue on his pinto rides a cowboy all alone.
And he sees the cattle grazin' where a century before
Santa Anna's guns were blazin' and the cannon used to roar!
And his eyes turn sorta misty, and his heart begins to glow
And he takes his hat off slowly to the men of Alamo.
To the thirteen days of glory
at the siege of Alamo. 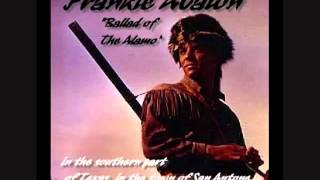 check amazon for Ballad Of The Alamo mp3 download
these lyrics are submitted by kaan
these lyrics are last corrected by Jack
browse other artists under F:F2F3F4F5F6
Songwriter(s): Paul Francis Webster, Dimitri Tiomkin
Record Label(s): 2011 Vintage Music
Official lyrics by