A Version Of Himself Lyrics

A Version Of Himself Lyrics


Mark: Well uh . . . I play a v-, a version of myself a-,
as Frank sees me, you know, like, you know what I mean?
Interviewer: No Mark: It's not, uh, he sees the group
from . . . like we see him from one point of view and he
sees us from another place, this was written around like
we're, you know, the folklore that each member had
brought to create the image that we portray, like, uh,
some of the scenes have happened before, specifically
the, the hotel room scene where the group sits and talks about how Frank is not important to what the group is and
. . . that scene I remember happening many times, uh,
just the whole idea that it is Frank Zappa & The Mothers
Of Invention has always given us something to talk about,
you know, Frank is, you know, our boss and so there's
always that kinda management, uh, worker relationship
that, you know, that just happens, it isn't like you, you
plan for it to happen, it just does . . . 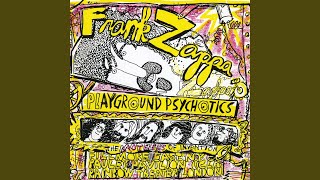 check amazon for A Version Of Himself mp3 download
these lyrics are submitted by kaan
Songwriter(s): Frank Zappa
Publisher(s): Munchkin Music Co.