Do You Wanna Be A Rider Lyrics

Do You Wanna Be A Rider
Fiend
All In A Week Mr. Whomp Whomp Live Me Long If They Don't Know I'm Losing My Mind I Swore Heart Of A Ghetto Boy Going Out With A Blast For The N.O. Don't Mess Around
Official page Do You Wanna Be A Rider (feat. Prime Suspects, Gambino Family & Magic) video Fiend twitter Fiend facebook

Do You Wanna Be A Rider Lyrics (feat. Prime Suspects, Gambino Family & Magic)

[Fiend]
I'm a livin, breathin murder topic, but in the ghetto makin sales
Leaving bloody trails, loving that gunpowder smell
My type about to bring hell boy, flames to where you live
My though, lickin it, got it initiative and jump in get your kid
It's my word after the mid, she did that bit on your live
Though, blame it on Christ, we can happen and deny
I get the cappin for the strise, have a toastin like the hawk
And control as the evil men do, as if they was a cup

[Magic]
Picture my mind is full of wicked thoughts, unleash the beasts
Where you niggas that appose me? May y'all rest in peace
I defied and lost man kind, so father forgive me
But its this thug in me got me want me kill my enemy
Will I pay for all the pain that I can cause these families?
Unable to control myself, I'm pleadin in insanity
I'm beggin for my lives cause I'm hated for death
I watch my step and now learn to appreciate every rep
I was born a killer, I've been rejected from society
Fiend's on my side, so none of you niggas can ever bother me
I try to be a better image for my family
But I'm a sin, so they label me a muthaf*ckin rider Chorus 2X

[Prime Suspects]
Murder, murder, wonder was the victim I caught slippin?
Now I'm trippin, so drop that
I'm having flag, best to get popped at
Harrassed at a nigga in black, he did the cap
He's blamed it to the states and I can tell you what happened

Check my jacket, you gon' find slow frangin and brangin
Pain to the family or the nigga named Raymond
Got the habit, been down to ride from day 1 ( Uno)
Death blow to the full of the made one

What you know about the powder to the powder, hour after hour
On the block, with the Glock cockers, dills go sour

[Lil' Gotti Gambino]
I'm stuck with these mob ties and a matter of die survive
Look in my eyes, determination did shine nigga
I'm out to get mine, 45, my waist line
I waited for my time, Gotti, I'm down to ride
Alias forgive me, for the sins who commit
But these bitch niggas are bout to be dealt with
I'm out for show, bitch told me, "Gun up for show." Hundred round drum
Niggas I'm bustin for fun, make it blood run
Duckin for fun, I live my life on the run
But keep my eyes in the pride, cuz if I slip and I die
So niggas, I'm down to ride wit 'cha, get high wit 'cha
[Fiend]
Because it No Limit
[Lil' Gotti Gambino]
Get ready to die wit 'cha 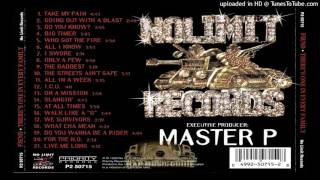 check amazon for Do You Wanna Be A Rider mp3 download
these lyrics are submitted by itunes3
browse other artists under F:F2F3F4F5
Record Label(s): A Priority Records, LLC Release 1998 Capitol Records, LLC
Official lyrics by