Intro:
(Martin Luther King Jr.)
“For even though, we face the difficulties, of today and tomorrow. I
have a dream, that one day, this nation will rise up, and live out the
true meaning of its creed: “We hold these truths to be self-evident,
that all men are created equal.”

(Barack Obama)
“We shall overcome. Yes we can. And where we are met with
cynicism and doubts, and those who tell us that we can't, we will
respond with that timeless creed, yes we can.”

Verse 1:
Straight out my momma womb n there I was by her side
She held me in her arm n night n day my momma cried
I used to wonder y, until I realized, that I'ma grown ass man n ain
measured yet
But ain mad at ya pa' cause now I understand
That u ain't never gonna win if u a black man
Barack O. might done won, but it's like he still losing
Cause everyday look all this bullshit the put him through n
What about Martin Luther King he, he say he had a dream n
N now he dead in the ground for no apparent reason
They put us in the sun, try to tell us anythang
But then they wonder y we rob, steal, n swing caine
Black men we doing life, n that's for selling crack
He tried to get him a job but they ain't wanted to c his plack
Or was it cause he black, n been to prison twice
But would it do him any good if they ain't tell him right
My momma told me “Son, hey u was built to win”
But u go'n always lose because the color of ya skin
N now she doing 10, my nephew doing life
N he ain't never been in trouble his whole damn life

Chorus:
So go'n n take a stand, n raise ya right hand
That you'll never give up n give it all u can
Cause they committing crimes, I call it robbery
I understand it's kinda hard being a black man(2x)

Verse 2:
They say we free from slavery, I tell em go to hell
Just take a look in the jails cause we fill up the cells
The say “The land of free,” I say they kidding me
My partner mention them names n what they gave him free
I say it to they faces ion care they all racist
Uncle Tom they make me sick they scared of they own races Now that's a damn shame, turning on ya own kind
Y'all playing mind games f*cking all my people mind
We do our 1st crime they asking for a hundred years
Y'all the ones to blame for it, look at all my people killed
N every dime I get u still gotta get paid
I'm praying for some better days to free us from this nigga sade

Chorus:
So go'n n take a stand, n raise ya right hand
That you'll never give up n give it all u can
Cause they committing crimes, I call it robbery
I understand it's kinda hard being a black man(2x)

Verse 3:
Barack O. in the chair, they saying it's his fault
When Bush was in the seat nobody fixed they damn mouth
They say I'm so young, what the hell ya talking bout
I serve em come n ride with me I show u what I'm talking bout
Ya, ya c off in our hoods, everyday we gotta struggle
N, most of our daddy's in prison so now we gotta sober
N now it's getting rougher, kids calling kids mothers
Yea u give us stamps n we c b for real y'all f*cking love us
Don't wanna sell drugs, don't like to rob n kill
But this the only way my people got they pay they bills
But u already know it, cause y'all the real reason
Or we ain't getting a prayer, cause all we got is Jesus

Outro:
I'm on yo side homie, cause I know just like u know, that we the
real reason they wining, I mean, we good at Football, Basketball,
Baseball, Tennis, we even good at Soccer (ahaha) I mean we even
the best at Golfing got damn it, the only thang we ain't the best in is
Hockey, n my son wanna b a Hockey player, so got damn it we
prolly the best at that, we got a black president now, I c u Barack,
let us win at some', I mean we was, we was built to win, but they
got us out here to lose, aye ya pa', ain never met u before but
where ever u at, rather u here or u dead in the ground somewhere,
I want u to know right now pa', that ain mad at ya, cause I know
just like u know, n now I understand, that u ain't never go'n win, if u
a black man 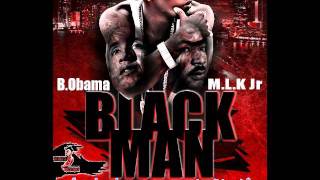 check amazon for Black Man mp3 download
these lyrics are submitted by La'Treal
browse other artists under F:F2F3F4F5