Through The Storm Lyrics

Through The Storm Lyrics


Never took a liking to the lifestyle
Dabbled just a little but I'd never say I'm that wild
Never say never, since the beginning I was that child
Ready and willing to get it in, focused, hoping to be a rap god
Quite odd, few screws loose, on my iPod
Mac Dre, UGK, 12th grade in the H
Went hard every day at Carnegie Vanguard
Letting niggas know exactly what my next plans are
Few years later I'm in LA with Tom Cruz
2012, the years prior I paid dues
f*cked with Das Racist to this day they still my dudes
R.I.P. Yams, had me and Rocky on Pro Tools
At Daniel Lynas studio, damn it, I was studious
Learning each inch of the game, put every tool to work
Do it like my duty, yeah, need more than a souvenir
In this shit to get the glory, you can keep the free beer

Learned a lot about myself but still got more to figure out
Glad I took this route, I'm underground, come and dig it out
Dig a bit deeper, find something you can smile about
Life hard right now, I swear I'm finna work it out

Now I'm back in California Lived a bit in Brooklyn, Houston, Mexico
In that order
Atwater Village, where I first resided in this city
Still dear to me
Acted such an ass I need an Emmy
Used to puff it, pass it to my niggas
Now I take a break from the smoke to keep my mind in it
Never liked The Strokes but I stroke it like you pet a kitty
Thinking bout the only girl I ever see when I ain't busy
Back up like my nigga Juve said for the Nine-Nine
Finna call this f*ckin A&R for the 9th time
Ima need the splits to hit my BMI right on time
If the side is soup, you know I gotta get the wonton
If I die today, I'll die with pride on and offline
Know enough to know when I fail, it ain't the last time
Older, I know how to prevail when it is crunch time
Bolder, I know more of myself, ain't finna f*ck around

Learned a lot about myself but still got more to figure out
Glad I took this route, I'm underground, come and dig it out
Dig a bit deeper, find something you can smile about
Life hard right now, I swear I'm finna work it out
Explain lyrics
Correct lyrics 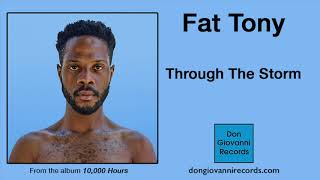 check amazon for Through The Storm mp3 download
these lyrics are submitted by itunes3
browse other artists under F:F2F3F4F5
Record Label(s): 2018 Don Giovanni Records
Official lyrics by