Definition Of A Don Lyrics

Definition Of A Don Lyrics

Yeah.. Definition of a Don
It's like I gotta keep remindin you and remindin you
Who's that nigga.. You heard the kid
Fly was on the casket of all those who appose the squadus
It's the motherf*ckin Don Cartagena ya heard
What?!

[Chorus: Remy Martin]
They wanna know why ya name is Joey Crack
You a hustler, how they think you got the stacks? (Uh)
You stuck being in jacks on the blocks witcha paps (Yeah)
And the Squad to hard niggaz gotta fall back (Tell 'em)
Damn papi, you're shit is icey now (Uh-huh)
In the Bronx witcha Benz rims pokin out (Ten mil)
You got the niggaz in the pen straight loc'in out
But when the don is on nigga close ya mouth

[Fat Joe]
Yeah, yo
You wouldn't understand my story of life I live
Most niggaz that really know me got life as bids
The trife as kids, this ain't no Scarface shit
These niggaz really will kill you, your wife, and kids
I walked through many blocks niggaz couldn't stand on
Had shit locked before I had a glock to even put my hands on
Before I had the dough to put my fams on
Before I had rocks sealed in pink tops, tryna get a gram off
A wild adolescent, raised by the street
Mesmorized by the dealers and the places they eat
And when they blazed the heat, I was the shorty to take the handoff
Run upstairs, tryna sneak the gat past grandmoms This is how it should be done... my life...
Is identical to none, son tryed to duplicate but I knew he was fake
Cuz everytime I walked by he turned blue in the face
I'm like heavy on the leg when I pop
All my change is like heavy on the weight when I cop
It's just the way it's done
Niggaz tell me they respect the way I blaze them guns
On hold it down for the Bronx in the name of Pun

[Fat Joe]
Yeah uh, my name ring bells like a P.O.
Put the pressure on a nigga like I'm right atcha do'
With the muzzle out, nigga can't shoke with my dough
I'm at his mothers house
Beat up his pops, put the pistol in his brother's mouth
Wave bricks, whips... jerked a few coke and next play the strip
with chrome knowin that they won't forget
And on the weekends we shut down clubs
You know them crazy Peurto Ricans always f*ckin it up!
If I can't afford it, I'ma extort it
If I can't cut it, I'ma bake it
Strip you niggaz butt-naked, I'm a thoroughbred
Carry guns and pump heroin
Never went O.T. I'm too light for Maryland
I'd rather play the streets of New York
Where the fiends are guarunteed to keep the meat on my fork
I'm just a hustler - feds put the tap
on our phones in hopes of cuffin us
Then wonder why we livin life so illustrious 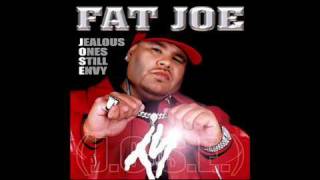