To the point, straight from the source
Double Benzito and one Porsche!
A girl in the passenger seat, me, I'm steering;
To make a long story short, I was gearing
Patent leather! Silk! Credit cards!
A pocket full of money! The whole nine yards!
Off to the beach and I must discuss
That the night was hot and full of lust
It ain't nothin' new, it's an everyday thing
And if I ain't with a girl, I swing
You know, hang with the fellas at the disco
Buff was actin' wild off a bottle of Cisco
Cory and Joe were in the back profilin'
Me and Kool Rock were cold stylin'
Girls in abundance, all of `em scroungin'
But me, man? Yo, I'm just loungin'
Word up, I'm just loungin'

Me and the crew or should I say posse
Had the music kickin' in the 4x4 Jeep
We took the top off and then we stopped
At the pizza shop to get something to eat
Just then we saw some cuties cruisin'
So, we pursued them, We thought that we knew them
But, boy, was I psyched
Cause I'd never seen these girls before in my life
So, we kept on riding
Man, the day was hot, word up, I ain't lying
And, yo, you should have seen us
On the strength, I was set Stopped at the red light, popped in my cassette
And you thought you was chillin'?
Man, you ain't seen nothin' yet, man, I was just loungin'
Word up, I was loungin'

[Prince Markie Dee:]
Word, take it slow
Day by day, that's the way life should go
You don't need to ill, so, now you know
Take it easy `cause I said so

[Kool Rock Ski:]
Yo, I think I'll take a cruise
Around the world to wherever I choose

[Prince Markie Dee:]
On the strength, I think I'll do the same

[Kool Rock Ski:]
Yo, Chief, don't even try to run my game

[Prince Markie Dee:]
Wait up, Rock, we can chill together

[Kool Rock Ski:]
Ain't nothin' wrong with that, my brother
Yo, Buff, how's that soundin'? 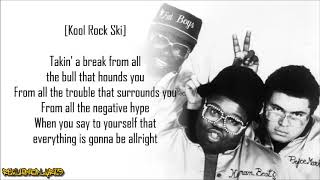