A plate steel object was fired
And I did not feel for my compatriots
Hated even the core of myself
Not a matter of ill-health
It was fear of weakness deep in core of myself
The fact attainment was out of...
[Mounting orations/What generations]
[Dumb populations/What emulations]
To be humbled in Iceland
Sing of legend, sing of destruction
Witness the last of the god-men
Hear about Megas Jonsson *
Cast the runes against your own soul
There is not much more time to go
Work fifteen hours for the good of the soul
And be humbled in Iceland
Sit in the gold room
Fall down flat in the Cafe Iol*
Without a glance from the clientele
Your coffee black as well,
Hair blond as hell
Cast the runes against your own soul
Roll up for the underpants show
And be humbled in Iceland
And the spawn of the volcano
Is thick and impatient
Like the people around it.
See a green goblin redhead, redhead Make a grab for the book of prayers.
Do anything for a bit of attention
Get humbled in Iceland
What the goddamn f*ck is it?
That played the pipes of aluminum
A Memorex for the Krakens
That induces this rough text
And casts the runes against the self-soul
And humbles in Iceland
[* Megas Jonsson is considered to be "the father of Icelandic
rock'n'roll"; he "ridiculed the sacred Sagas of [Iceland], wrote
scathing,
surreal lyrics, got heavily into booze and drugs, was barred from radio
and shunned by society. In 1979 he released a double album called
"Plans For Suicide," announced his retirement, and hasan't performed in
public since he's now a dock worker." -- from Colin Irwin's 26
September 1981 Melody Maker article about the Fall in Iceland. --Ed.]
[* Cafe Iol is a famous meeting spot in Reykjavik where MES hung out
when in Iceland. --ed.]
[* [From Paintwork]
Explain lyrics
Correct lyrics 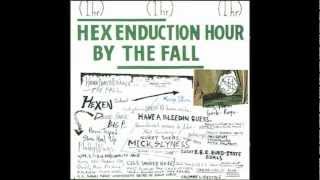