[Verse One: Velocity]
Can you feel speed coming?
The beats humming, you need something to keep your knees buckling
Keep frontin, you'll be duckin from these hunting obese gunmen
Airing out these f*ckin' MCs puffin, so breath some in
Each one of my words is just stunningly stern
And it's funny you learn through action not example
That's exactly why I have to smack you
Learn that (smack, smack), Learn it again (smack) got it now?
Didn't ya know that tonedeff can flow fast enough to mow Sonic down?
Well, I'm on it…shower your senses, power defenses up
If you don't wanna get offended
Or else it's death and a negative attendance in the census
When I render you senseless
I'm the veteran that was sent with a vengeance
That's leaving you with a set of bent wrists
And a dented cleft chin, left with a horsejaw
Prolly gonna need a veterinarian or a dentist
Better get a move on, call U-Haul and troop on to Sioux Falls
with blue balls, you all really think you're ill
until we're just sharing the bill with you all and we're too raw
Who's stalling? Cause I done never held it back man
Step or take your last stand while we enact raps to packed jams
Idiot niggas, figure they're quicker 'til the maniac
is leaving them with one shoulder missing like it's 'Flashdance'
Can't stand these motherf*ckers that can't rap
Tonedeff & Stan = instrumental like Sam Ash
f*ck a bitch until her p*ssy cat naps
Y'all niggas are pretty in pink and you been chillin with the 'Brat Pack'
Fact is, my stats kick your ass bitch, your too average to consider surpassing
The task is tedious, really, this beat is just feeding me
You thought Gonzalez was Speedy!

[Verse Two: Substantial]
You're wacker than Ja Rule we fast and furious like Vin Diesel
Ink penetrates the paparus my pen's lethal
Sookie, Sookie you rookie goodie goodie we been evil
f*ck one on one Tone and I take ten people
To even up the odds 'cause you and your friends feeble
Styles been played like movies with 10 sequels
(Do you love hip-hop?) does eminem offend people
Well so do we 'cause absolutely nothing's what you're showing me
Vocally magnificent what you want is insignificant
In the big picture bitch *racist slang* you're so sensitive
Gonna squirt some I hurt one or two persons before the verse done
Your mom be sucking the girth numb beat it up and made her cum Efamm making you nerds run when I get the mic it's curtains
If you don't like it when your earth's done blow me homey
Hold that mouth full of cock sauce and a bozak
UV and E til I got wack that's never homey know that

[Verse Three: Tonedeff]
Say what you want, but don't ever claim that you want it
Stay in the closet or you'll sustain so much pain that you'll vomit solid objects
You never swallowed, like hollow organs, you'll cough up
Dried esauphagus knots and notches, We're the marvelous 2
That are part of the crew that came to astonish, The Plague is brolic
Scrape your face with abrasive cleanser, say that we're raining comet
Fame's a promise you'll never fufill, I'll just set up the kill
Substantial lances in your neck, and sets your head on a hill
Really, for the world to see
Everybody wanna get busy until they really gotta twirl with me
I score with ease, and floor your team
I'm sure you dream of f*ckin, if weren't for your ball disease
You'd prolly skeez a broad or three
But all of 'em see that you ain't nothing but a poor emcee
So, if you're looking for your pride, and a reason to die in the blink of an eye
Then keep in mind that they all with me
Now, hold your screams in
You don't wanna play in the court the kings in From Newport to Kingston
I'll give you more defeats in wars than Normandy
Complete with hordes of soldiers beefin
Keep your orders straight, cause sweepin me is more than fate could even orchestrate
Erasin more pieces of you than your whore's abortion takes

[Verse Four: Substantial]
(Substantial why you rap so slow?) I got asthma
Give me a second ...lets see if I can rap faster
I'm smarter harder spit quicker stronger
Even my dick's bigger longer in fact it sucks to be you but what can we do
You're a weaker sweeter poster boy wussie who needs a hug 'cause you're p*ssy
You stank pot thou reek of skank twat
My speech is flame hot E weak I think not
We link and bang spots we drink to slain cops
Who were crooked the little props I got I f*cking took it
Then spat on my doubters & shattered my cowards glass jaws
By ripping up rap tours, whether little or no audience
Flip it acapella even killed it to accordions
Not a battle rapper back packer bitch smacker thug
Just someone who could whip your ass but would rather show you love
So any further sleeping on me is not recommended
We'll never be fam if you haven't already been befriended 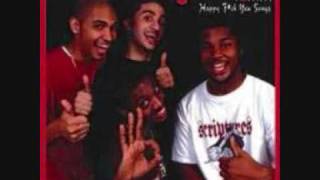