I can smoke a whole eighth in a spliff
Some call that a problem but I call it a gift
Hit the clutch then I start to shift
Turn it up - light my dutch then start to drift
Lost Angel, Westside rider
The official, four-oh-five Friday, sound provider
Underground hitman, hard to hire
Unsigned death threats written in typewriters
Poetic, I'm that type of writer
Got that "Don't call me, I'll call you" type of fire
Fake it 'til you make it, you're such a good liar
Headliners used to not make the flyer
Four-oh-one K, and I don't mean retire
Chase loops, still war all day, I'm in denial
Peace ain't the word to play - it's violence
I ain't have shit good to say, so here's silence...

[Chorus: cuts by DJ Revolution]
[Jay-Z:] "I slow flows y'all to death"

[Evidence:]
Yeah, don't stress, emotions rest
'Til they wanna see my best, as good as it gets
Don't hold weak cards, don't hold regrets
Players, don't change past the seventh inning stretch
Learned from vets and they ain't pet doctors
They the type they arrest in "Clockers"
We sellin out these operas, and don't mean sing
I mean opera house stage we rockin
C-A, all day
Reppin it, party time, excellent It's perfection kid, I'm not affectionate
That's what my last girl said, too much estrogen
(I'm in trouble) Yeah, that ain't PC
But sometimes that ain't E-V (what can I do) I just feel that way
Right now I'm on my J-O, issue payroll
Speak in codes, 'til we reach another day

[Evidence:]
{Ay light another one man~!}
I used to be Ice-T "Reckless" (RECKLESS)
Wild out like I'd never see braekfast
Nightmares, tiein dreamcatchers
Tryin to run breathless, outta control
I don't give orders, I make suggestions
Then walk away! I've learned my lessons (Ev have patience)
It's simple, they neglect it
Win at chess, still lose at checkers
That ain't weakness, it's a death wish
Choke 'em out; another off the checklist
I came too far not to be respected
And drove too far to hear they closed the guestlist
(You gotta be kiddin me) A new rain out the smokin bar
Umbrellas up, these cats are dogs
And just because it barely ever hails in L.A.
They say I can't reign the game and hail from H.A.?
They crazy~!

[PMD:]
When five-oh roll, they say what's the M.O.
Another rapper was hit, by Mr. Slow Flow

"By Mr. Slow Flow" [scratched]
[Ev:] That's what they call me this year 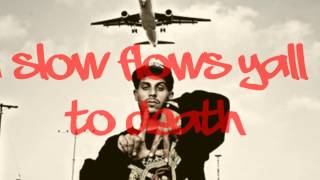