You Only Want Me 'cause You Want My Sister Lyrics

You Only Want Me 'cause You Want My Sister Lyrics


You pulled up at the house at half past seven in your '69 Impala, you shook hands with my father and we stopped off at the drug store by the drive-in for some Trojans and a six-pack, but still your eyes kept wandering back to her. It's always her.

So let's get one thing straightened out here, sir.

( Chorus: )
If you think you're seeing double, let me save you some trouble. This ain't no two-for-one bargain here mister. 'Cause I'm much more than just my side, had enough of two-timing guys who only want me 'cause they want my sister.

My eyes are just as blue as her's, my hair is just as fine, and that tattoo on her lower back's exactly just like mine. But if you look beneath the surface, we're as different as can be. 'cause there's just one heart that beats for you and that heart belongs to me and not to her, it's always her.

so let's get one thing straight if i'm your girl. (repeat chorus)

And if tomorrow you should die my sister would not bat an eye, she doesn't even know your name, she's going with some other guy. As long as she is still around i'll always have a trace of doubt I need to know your love is real, but how?

We're all dressed up, the flowers sure are pretty. Mother pays her last respects I look around, no one suspects that it was me, I put some Drain-O in her coffee. Now that she is underground i'll know that youre not hanging 'round for her, not for her. now I know your love is true for sure.

It pains my heart to think of her a rotting, stinking, maggot-infested, bloated and pus-oozing corpse that I leave her. You can't imagine just how much I miss her, but now I know you want me, not my sister. 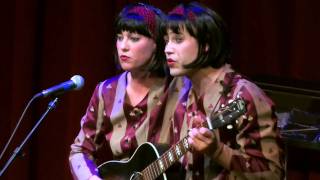 check amazon for You Only Want Me 'cause You Want My Sister mp3 download
these lyrics are submitted by BURKUL
browse other artists under E:E2E3E4E5E6
Songwriter(s): Jason Webley, Amanda Palmer
Publisher(s): Eight Foot Music
Record Label(s): 2010 Eleven Records
Official lyrics by