[Da Brat]
get yo' ass asthma with all that coughing, yeah [COUGH]
Eve where you at? Ayo Trina where you at? [laughing]
Ayo Brat
Picture this, Eve walking down the street with two gats by her side
The one on her right Trina, the one on her left I
In a high holster, studded in rhinestone
Ready to cock back, we bust and your mind blown
Just like that, braggadocious cuz I'm the dopesest Brat
Most of these niggas focus on the ass that's fat
And I'm just so ferocious to the rhythm of a high hat
Why ask why? Cuz how, whenever I do it I buy what I wanna buy
Do what the f*ck I wanna do til I die
Shinin on everybody for the world to see
My timin is always perfect, endlessly
I deserve to swerve a little and splurge alot
With the nerve I got, wearin these blindin rocks
Got Chicago, Miami, and Philly
A collabo, of three of the illest bitches, really

[Trina]
Uh, uh, uh
Miss Purina, Trina the M-I-A bitch
Them I play wit, eenie meenie meiny mo
Pickin basically the richest nigga, for the baddest bitch
Me, Eve, and Brat, it's banannas shit
We aint havin this, I steps on toes In a pair of hot shorts and eight inch stelletoes
Iced out, drippin in Channell
Prada, Gucci, and all that
I make 'em fall back
Hair done, fresh metti and peticure, bikini wax
Gotta keep the cat smooth so when my nigga ask for the p*ssy
It's good and wet
After just one f*ck, you won't forget
I'm made up in the tropics gettin sunburned
Bare ass out with the diamond thong on
Nigga you thought you got yo' freak on in Japan
But I was gettin my creep on with yo' man
Cuz I'm a hot bitch...

[Eve]
Uh, yo
When three raw bitches get together it's off the chain
Thought you found a spot to fill, you lost the game
Boss bitches stallion, scream they name
Hate us cuz our life right, eatin from the game
Only f*ck with the realest, don't associate with lames
How the f*ck can't you feel us? Three of the illest dames
S-C-X-Y, Trina, Brat, and oooh I
Bombshell, other bitches is true lies
I'ma keep it simple, rock how I'm meant to
Pretty with the heels on, or shitty with the Tim boots
Do it how I wanna do it, question my mind
You gon' understand from the rest of my lines
Bitch please, you might as well be on freeze, when it's Eve
You aint really tryin to f*ck the game up, you just a tease
You don't want it when I really get buck, you wanted peace
Have you hidin in a hole when my album got released 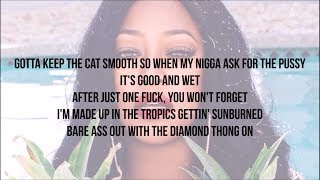