[Music and lyrics by Vidar]

Once the sleeping powers will awake,
From the darkest depths they'll arise,
Spreading across the seas of the holy land,
Like a plague they'll infect the world.

... And then the evil shall be born,
Sacrificing other's scorn,
Will quietly sit on it's throne,
Empire of underground
Will bury what wasn't found,
Will we be ready to rebound?

"And after last strike of darkness,
The heavens were torn in two,
And the blood of Seraphims fell upon the earth, The bounds of the netherworld were broken
As the Satan's legions attacked
From the underworld a throne rose on the ground.
Upon that throne, Lord of Darkness sat,
Surrounded by pagan Gods,
And the temples of God all burned to ashes,
After two thousand years,
Filled with the supremacy of filth,
The king of eternal empire was enthroned... again"

The seed of Christ will be impaled,
Crucified on the mountain of the dead,
Ancient divinity shall unite that day
With the Four Horsemen they'll ride 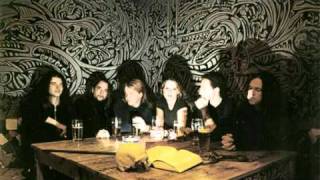