Yeah I was foolish and wild
she was classic and regal
we were fresh out of school, both barely legal
we were young and on fire and just couldn't wait
six weeks in, she was three weeks late

yeah her Daddy's gonna kill me and thats a fact
maybe we'll just leave town and never come back
or I could stand there and tell him
face him like a man
oh who am I kidding, he'll never understand

hot summer nights, whispering her name
under the blanket by the river bank
hearts beating fast we never thought twice
but she pulled me close and i held on tight 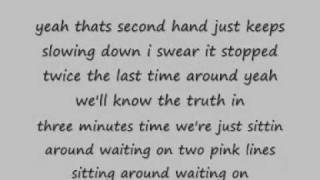