[Steven Spielberg]
Picture a child sitting next to a projector
Learning from your films to become a much better director
Now picture a 3 billion dollar dream machine
Who can block bust all over your crop duster scene!
Try to Duel with me Alfred, ya must be Psycho
I'll bring back JAWS and take a bite of your Lifeboat
I'm Always so on the top of my game, I get the Vertigo
My jet's in the Terminal, waiting for me to Murder! ya
I rocked the Academy and the DGA
You rock as many Oscars as that schlep Michael Bay
Next time you're filling up those jowls with three steaks and soufflé
Check the trade, see me Amblin to my next big play
I produce cartoons and made games for all ages
You produce Jimmy Stewart making one of two faces
Maybe next time I visit, you'll be a bit more gracious
Now kiss my full moon and just bask in my greatness!

[Alfred Hitchcock]
That was a Close Encounter of the Turd Kind
But there won't be a pretty ending this time
Half your billions should go to John Williams
Now brace yourself as I reveal my brilliance
I'm the master, of suspense, so intense
No defense against Hitchcock once he presents
My skill is enormous, orchestrate brilliant performance
You're more horrible than Megan Fox's acting in Transformers
Come on, fish puppets and Muppets to stir the fears up
I squeeze screams out of chocolate syrup
I'm the best mamma-jamma ever stood behind the camera
Damage panderers and haunt you like the last Indiana

[Quentin Tarantino]
Cut! Gimmie a Tylenol, stop rhyming, y'all
Alfred, you got no style dawg, I'm the king of dialogue
There's only one movie I know you from
And I've seen more blood in the shower when I stubbed my toe in one
You tried to fight in World War One but couldn't do that
The British Army wouldn't let you join cause you were too fat
Look it up, it's a true fact, Wikipedia that Now allow me to attack Steven the hack
Due to War of the Worlds a failure's what I label you
It looked like some sell-out bullshit Michael Bay would do
Ask anybody "What's your favorite Sam Jackson part?"
No one's gonna say "What's his name, from Jurassic Park?"
Scripts that I write ain't the... Cleanest (f*ck!)
But when I grip mics I'm the... Meanest (Dick!)
Quentin Tarantino is a... Genius
A bad motherf*cker from the wallet to the penis

[Stanley Kubrick]
Genius is a powerful word, but there's no reason to use it
'Less you're talking about the Kubrick
Then there's really nothing to it
Every thing I do is visionary
Every single frame a painting made exactly how I wanna make it
Do another take and get it right, 127 times
I'll make you learn to love me, I'm the bomb, drop ultra-violent rhymes
Like Clockwork, make you all hurt, beat Spielberg the Color Purple
A.I. is the worst waste of potential since the Ninja Turtles

[Michael Bay]
That's enough, I've heard enough crap from all of you
Why don't I come down there and show you what a real star can do?
I swoop low with the telephoto, no Bruckheimer, I work solo
If there's one thing I've learned, bitch, this game is about motherf*cking money
I make that dollar, y'all, motherf*cking money
Even make Mark Wahlberg make some motherf*cking money
I set up shop and got a few drops of that Got Milk money
Rose to The Rock, now I got that socks made of silk money
I ain't got that guilt money, I don't give a f*ck
I take my checks to the bank and I sign 'em with my nuts
I give the people what they love, while the critics say I'm evil
Got no time to read reviews, while I'm working on the sequel
Got a gift from above, and the eyes of an eagle
When it comes to blowing up, no director is my equal 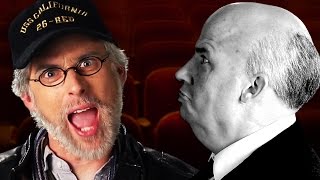