Lewis And Clark Vs Bill And Ted Lyrics

Lewis And Clark Vs Bill And Ted Lyrics

[Lewis and Clark]
You can't be starting with Lewis and Clark
Cause we cut a path through emcees like a walk in the park
And give 'em back a whole stack of maps and accurate charts
Showing exactly where our footprints on their buttocks are marked
We're two travelling wordsmiths spitting hotter than a furnace
And we'll own you on the mic like the Louisiana Purchase!
You're worthless. Your future selves should've told you that
Now go back in time and give Doctor Who his phone booth back
We discovered bears and beavers and prairie dogs and weasels
Rattlesnakes and catfish, owls, larks and eagles
And plus flora galore! And according to our observations
These two dickweeds right here are severely endangered
We inspired pioneers and travelers near and far
You inspired air guitar and Dude, Where's My Car?
We conquered much greater dangers in our trek through Mother Nature
So step off, but tell Bill's stepmom "don't be a stranger"

[Bill and Ted]
Bill's mom is hot, but that joke was most heinous
I've heard better insults dropped from Socrates' anus
That's my stepmom, Ted Let's keep it excellent between us
And show these boy scouts how it goes in San Dimas
We're quick when we spit like Billy the Kid with his guns
And you'll be verbally kicked in the nut-Sacagawea-puns
A teen mom carried you and your troops
They should've let the baby lead, and put you in the papoose And if those native dudes knew what white dudes were gonna do
They woulda stopped you in Dakota They should totally Sioux
Why don't you go back to exploring Napoleon's old swamps
Or you'll discover your Corps most triumphantly stomped

[Lewis and Clark]
Did you hear that, Meriwether? I think they mean to brawl
I'll take Neo. I'll take the one that no one knows at all
From the Falls of Black Eagle to the Pacific
We put the 'dis' in dysentery cause we spit sick
Without Rufus you'd be useless on all the trails we blazed
You couldn't navigate your way out of a Circle K
Send over Garth and Wayne, because you turkeys aren't worthy
Suffering your raps is a most bogus journey

[Bill and Ted]
Man, they totally burned us. I feel like such a doofus
What do we do? I don't know

[Bill and Ted]
Rufus!
He's right, dude. We don't have to take this kind of abuse
From some Paul Bunyan dudes in potato sack shoes
You rode a river one direction; we travelled four dimensions
Rescued bodacious babes, and get back for detention
I've seen your future, Mr. Lewis and I don't wanna be rude
But spoiler alert: You totally kill yourself, dude
So we offer you peace with these resplendent medallions
And we claim this battle for the Wyld Stallyns! 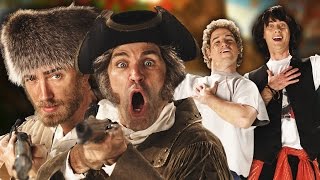