[Deadpool]
Oh, is it me? Well, here's my first issue
I barely even know enough about you to diss you
But do you guys honestly think that I'd screw this feud up
And lose to the dude a huge toothy cootchie chewed up?
That's bananas! I do damage when I brandish my katanas
Man, I'll slice you up then vanish in my ladybug pajamas
I'm one of a kind, you're a Xerox of your papa
Doing temp work for Vader and odd jobs for Jabba
I'm tight, you're mad baggy; I'm toned, you're so flappy
Mad cause Sam Jackson killed your clone daddy
Somebody oughta put a bounty on that cape
Maaaybe I'll write a letter, and mail it in your face

[Boba Fett]
Good thing I keep Tums in the Slave 1, cause your style makes me spacesick
And your bars are like your old pal Cable: f*cking basic
I'll smack a merc in the mouth if he doesn't quit running that lip off
Bitch, who you calling clone, you're a Deathstroke rip-off
You stole Spiderman's eyes and Snake Eyes' weapons
You got Wolverine's powers, man, you're comic sloppy seconds
That Dr. Killebrew dude needs to go back to med school
'Cause right now, you're no good to me, Deadpool

[Deadpool]
Ooooh, what's that? A missile backpack?
Well, I guess you'll be alright if a f*cking bird attacks
Presenting the most overrated character anyone ever saw With five lines in the trilogy, and one of them was "AAAH!"

[Boba Fett]
I only need five lines, 'cause I look f*cking great
You look like someone spilled lasagna on your face
But you're worth a lot to me if I bring you back dead
Schizophrenics pay triple, one for each head

[Deadpool]
Who you calling schizophrenic? You've got two different voices!
You're like your holiday special, man: full of bad choices

[Boba Fett]
You think your chimichanga's hot, but you couldn't be milder
You should've made the choice to ditch the prick from Van Wilder

[Deadpool]
And the coolest things about you got straight-up abandoned
You let a kiwi hold your gun and he f*cked up your canon
So maybe don't talk about movies cause you've got dick to say
Wrap that arm dart around Jar Jar and go far, far away

[Boba Fett]
I'm a legend, you're a trend, you ain't got half the skills I got
I'll beat your ass with one eye closed: Boba Fetty Wap
And then I'll call Domino's, she likes what I'm shaking
She prefers my durasteel to your Canadian bacon
Now take a lesson from a genuine assassin who's blasting foes
I come equipped with a full set of sick Mandalorian flows
Everybody knows you got that power of regeneration
Now run home and heal from this disintegration 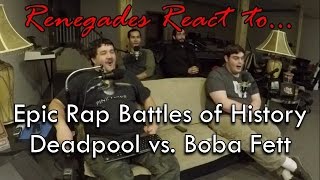 check amazon for Deadpool Vs. Boba Fett mp3 download
these lyrics are submitted by itunes3
browse other artists under E:E2E3E4E5