Yo, I dedicate to this to yo

To all my fans, keeping y'all in health
Let's tell this Whitey Ford to go f*ck himself
'Cause it's cruel when you cause a bad heart conditioning
Which I create, cause that's my mission
So, listen close to what we say
Because this type of fag claims to never be gay

I knew you was jealous from the day that I met you
I upset you, 'cause I get respect I pet you
(Boy)
I'm even liked better by your niece and nephew
(C'mon)
And now you hate Fred because Lethal left you

Pecker wood mad cause his record went wood
No, respect in the hood, fled to his neck of the woods
Got in touch with his roots, found the redneck in his blood
And said, "Heck, country western rap records are good"

So he picks the guitar up and he strums a few notes
He can't rap, or sing, but he wants to do both
(Ha, ha)
Puts an album out and rules for part of the year
Then Kid Rock and Limp Bizkit come from out of nowhere

It's the start of an era, rock rap's harder this year
No one's trying to hear some f*ckin' old fart in a chair
Sittin' on stage, strummin' acoustic guitar in your ear
So, you start to get scared, sit back and spark an idea

You just a quitter, and you bitter 'cause I came along
And the days of house of pain are gone
And if you talk about my little girl in a song again
I'ma kill you
(I'ma kill you)

You just a quitter, and you bitter 'cause I came along
And the days of House of Pain are gone
And if you talk about my little girl in a song again
I'ma kill you
(I'ma kill you)

Yo heart attack to stroke from the crack you smoke
To the rap you wrote, your f*ckin' answer back's a joke
And I'ma tell these motherf*cking fans the truth
The reason why you dissed me first and I answered you

You said I passed you in a lobby and I glanced at you
Like I ain't notice you? Bitch, I had a show to do!
Like I'm supposed to be star-struck, come over to you
You better shut your f*ckin' mouth while you oh-for-two

Back in ninety-four Limp opened the show for you
Rocked the crowd better and stole the whole show from you
Took your motherf*cking DJ and stole him too
So, you fall in a slump and get all emotional

So, now you sing and mix slang with blues and pluck strings
Confused as f*ck cause now your music sucks dick
Mr. Mr. Ass Kisser to get accepted in rap
Quicker but never last, and Everlast is a

Aight listen so this is what we ask of our fans
(Look)
If you ever see Everlast, whoop his ass
Hit him with sticks, bricks, rocks, throw shit at him
Kick him, spit on him, treat him like a hoe, bitch-slap him

Shit in five years we'll all be eating at Whitey's
And he'll be bussin' tables in that bitch
Cleaning the toilets
Aiyyo f*ck this, cut this shit off

Aiyyo Head, that's why I f*cked your mother you fat motherf*cker!

First off, f*ck your songs and the shit you say
Diss my wife, but at least I got a bitch, you gay
You claim to be a Muslim but you Irish White
So f*ck you fat boy, drop the mic, let's fight Plus I punch you in the chest, weak hearts I rip
Whitey Ford, forty and white, lethargic ass dickhead
I keep 'em coming while you running out of breath
Steady ducking while I'm punching at your chest, you need to rest

Dilated, go ask your people how I leave ya
With your three CD's, nobody sees, when they released
Evidence, don't f*ck around with real MC's
Who ain't ready for no underground beef, so f*ck geeks

I let you faggots know it's on for life
But Everlast might die tonight, haha
Fat boy murdered on wax and killed
f*ck with me and take a heart pill, you know!

Grab 380's when you see Slim Shady
Call the doctor to heal your heart
They shocked you back to life at the clinic
But you 'bout to get relapsed any minute
Honkey, I hit 'em up!

Hahaha, yo check this out
You faggots ain't even on my level
I'ma let D-12 ride on you bitch-made ass faggots!

Little faggot Hamburgular, I show you where the burgers are
At your own restaraunt, while I'm servin ya
Drop and stomp your whole heart 'til it stops
Call the cops, I'ma beat your ass while they watch

Ha ha, now we got the whole industry making fun of you Erik
Where's your House of Pain now? There's only one of you Erik
You a petty coward, you ain't ready to steady go a round
With some killers from 7 Mile to the motherf*cking Belle Isle Bridge

Got in his ass and now this faggot wanna mention me still
This ain't no freestyle battle everlast getting' killed with his chest open
Tryin' to throw a f*ckin' punch, but you just chokin'
Havin' a stroke and now you learn why crackers never earned a dime

'Cause you suck motherf*cker you should learn to rhyme
Talkin' 'bout you packing pistols but it's funny to me
You ain't never been in trouble, you just wanna be me
I'm a paleface killer whale

On his way to f*ckin' prison, pistol whipping tail, ha
Erik remember when I passed you in the lobby that day?
That shit was obvious you probably was gay, ha
Now it's all about country, you gave up Hip-Hop

Forty-nine thousand copies, the week your shit drop
While my sales making records break
Two and a half million scanned by the second week
Motherf*cker I hit 'em up!

I'm from Detroit's Pemberton Ave., where bullets tear you in half
f*ck the music, we got an Uzi for all you fags
Get the shit out of our stereo, dilated you violated
Now you 'bout to get annihilated, we gon' bury you
Iriscience get choked up and yoked up
All you underground bitches get your throats cut

What the f*ck? Is you stupid?
I choke Whitey Ford with his f*ckin' guitar cord
And stuff him in cardboard, chopped up in a box
With sixteen parts, I stomped on his heart

D-12, Amityville, f*ck your mother while you watch
Keep your restaurant locked and block your door
'Cause we hit 'em up like motherf*cking' Tupac Shakur
You a, "Black Jesus," heart attack seizures

Too many cheeseburgers McDonald's Big Mac greases
White devil, washed up honkey
Mixed up cracker who crossed over to country
Yo, aiyyo cut this shit off 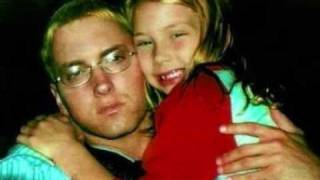