Thank you, thank you ladies and gentlemen
Thank you, we'd like to do something for you now
We haven't heard a girl sing it and since it's so
popular
We'd like to try and do it for you
We hope we remember all the words

Oh the shark bites with his teeth, dear
Scarlet billows start to spread
Fancy gloves though, wears Macheath dear
So there's not, not a trace of red

Oh what's the next chorus, to this song, now
This is the one, now I don't know
But it was a swinging tune and it's a hit tune
So we tried to do Mack the Knife

Ah, Louis Miller, oh, something about cash Yeah, Miller, he was spending that trash
And Macheath dear, he spends like a sailor
Tell me, tell me, tell me could that boy do, something
rash?

Oh Bobby Darin and Louis Armstrong
They made a record, oh but they did
And now Ella, Ella, and her fellas
We're making a wreck, what a wreck of Mack the Knife

So, you've heard it, yes, we've swung it
And we tried to, yes, we sung it
You won't recognize it, it's a surprise hit
This tune, called Mack the Knife 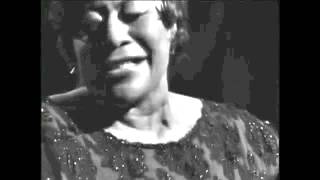