Can't Trust Nobody
Edo. G
Work For It Day To Day On Fire Be Thankful Wishing Just Because Too Much To Live Fo' On Dogz Bitch Up Off Me Sayin' Somethin'
Can't Trust Nobody video Edo. G twitter

Are you a rapper or a criminal who's tired of livin minimal
These labels wanna burn you, so a lotta rappers turn to
the streets, where mine don't eat, sheets, now beats
No record plays, back to the old days and old ways
To a hustle, back around like a belt buckle
Yo it's a struggle, for a dealer who can't shuffle
I throw the three up, plus I'm gon' be up
Hit my man on the hip, plus a nigga gotta re-up
No more bein sociable, goin on promotional
tours or in-stores, music floodin them seats indoors
Back on the block breakin laws
You was just up in the sky with the stars
Thinkin about a Lexus, now you gettin restless
Cut off from the guest list, now manifest this and test these
waters, cos your per dium's ain't feedin niggas' sons and daughters
It'll make a thug harder, I'll know

[Kool DJ EQ scratching]
"You can't trust nobody" [x8] Yeah
And fake friends with fake grins and fake skins
Wonder why you're one's ain't ten's, concerned with ends
It feel hectic, plus it's real hectic
How many entertainers went from hit records to jail records?
They thought their deal was their meal ticket (Yeah)
Went from a pack of double mint, to a single chicklet
I show 'n' tell, you never fall til you fell
and hurt yourself, over-exert yourself
You got to go and get the shovel and dig the dirt yourself
Learn how to work yourself, assert yourself
In this game of masturbation, you got to jerk yourself
And try to spread like Ebola, it's not always the real thing
like Coca-Cola, a baby couldn't move without a push from his stroller
Too many turn to drugs, they can't deal with it sober
And it's a big chance that you ain't never gettin over
But I don't know 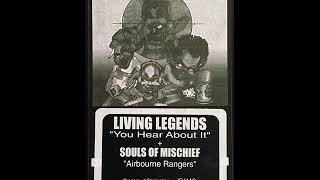 check amazon for Can't Trust Nobody mp3 download
these lyrics are submitted by kaan
browse other artists under E:E2E3E4E5E6