I’m out to bark again, ball cracked on the target, demolish it
Don’t jump, I just see, nah, took a swattin', then
Think while I jump back on the beat, like I need audiences
To speak too like a leech, needs to retrieve blood
Should I creep into these ambient sounds with the speech? Obvious
Witness the retardedness with cerebral palsy, that's several pauses
You might need a coffin with holes on the top of these tubes to receive
oxygen
You buried alive like a freak, six feet
Clawing and snatching and clawin' like a cat
And a dog and a rat
And a hog in a pen
With a frog and all there is to eat
Is frog and they
Beat each to a pulp with nails, teeth and jaws and then
They fight to the death for at least a piece off of them
See that you back to bars again, he's all asleep in coffin, man I’m all, they all that’s been, ever was at the start of it
You mention the squad and then
You mention the god of pens
Not of it, but I'm harder then
Flesh I’m harder than titanium brass plates that are polished in
Sticking emcees off like a fly trap, or a bobby pin
When I rap I’m astonishing
I attack tracks like a train track strapped to a bomb and send
Shockwave’s that's what I made, got this bastard popping then
I spit on my pop's grave without apologin'
Take shits on shih tzus
Pisses on igloos
Throw it up to the whole f*cking world, it's sick too
Vomitin' stomach fluid like you just ate shit stew
Did I say shit again? Do I give a shit, dude?
Neither does or they
Swimming in this ocean no, he just moves
What I’m trying to say is, it’s my motherf*cking ocean
And I crossed it
Built a bridge, the Slumdon Bridge, holla! 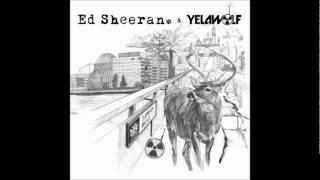