All the bad bitches boo when you rap
I can teach you how to pull em like a tutor in fact, I got
One in the front and
Two in the back
These bitches keep screaming "Odd Future is back!"
x2

Odd future I'm your mother f*ckin general
Catch you where slap, slap, stab bitches niggers go
Girl you ain't even gotta ask cause you're feelin know
Why this playboy so sticky in the centerfold
Sticky where my niggas blow
Icky earl finish first
Hit em low
Riddle them with chronicles of riddick bows
Chronic in the spliff to the dome, got my system slow
So i'm walkin out, ask them niggas what they spittin' for

Black ted bundy, sick as john gacy
Chillin' with a possible victim, she was 18
A hitchhikin hippie whore
Met her at the liquor store
She frequented to help support the habit picked up in the 4th
Grade A piece of ass, so I planned on screwing it
Slipped a couple roofalin inside the bitches juice and gin
Next thing you know, we're on Earl's burgundy carpet
And she's kicking and screaming, beggin for me to f*ckin stop it
Look, you know it's not rape if you like it bitch
So sit down like a pretty ho and don't fight the shit
Or else I'll have to tie a pretty bow around your bloody neck
Hide the slices from the gashes gven with a dull gillette
Mop the blood up with the body in the apartment Stash it where we hide the marijuana and the condoms

Yo Vince, let me tell you bout these ho's I met last night
They thought I was cute 'till I asked what that ass like
Damn right, red light, ran right through it
"You don't even have your permit, what the f*ck are you doin?!"
Well maybe if you'd shut the f*ck up we be cruising
And you wouldn't be sittin boo-hoo'in bout your bruises
But no, you wanna be Miss "f*ck with the music"
I'm zoning on relapse, she's slidin on blueprint
3 seconds it takes for her to turn blue with my hands around her throat
Her arms stop movin'
Pulse stops, too in the back, look confused I turn to tell 'em both not to
do shit stupid
Red, white, blue lights in the rear view, shit
Swerve to the shoulder tell em both no movin sit
Down in the back cause the windows tinted
As I roll down mine to forge a new friendship
"Aren't you a little too young to be driving?"
Look, officer. I'm just trying to get home
"Get out the f*ckin car with your license and registration"
I ain't getting out of shit, you startin to try my patience
Didn't have back up I could tell by the hummin bike
Reach to the glove, grab the mother f*ckin hunting knife
Stabbed him in his neck and hip
Threw him in the truck and dipped
Back to the f*ckin crib for some tea and crumpets, shit

All the bad bitches boo when you rap
I can teach you how to pull em like a tutor in fact
A dead one in the front, dead cop in the back
The two live bitches screaming 'Odd Future is back!" 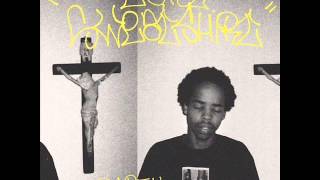