Hardcore
EPMD
Danger Zone Get The Bozack Get Off The Bandwagon Draw Do It Again Crossover Chill Check 1, 2 Can't Hear Nothing But The Music Brothers From Brentwood L.I.
EPMD wiki Hardcore video EPMD twitter

When I turn a party out, all hands is in the air
Some say it's chill, New York throw chairs
The punk funk sound to make a sane man flip
Girls rush the stage, faggots cold dip
Low to avoid the caps and blows
By the gangbanners at the B-boy shows
Wit the cops trying to control the crowd
But they can't, systems crank So What'cha
Saying's pumping loud
Blows are thrown, heads are flown like Pan Am
Brothers licking off like the son of Sam and
The bass continues to thump
Some brothers hit the parking lot to go pop trunks
Hoes are slapped, jewels are snatched
Brothers are caught in the cross fire without no
Caps
And on my way out, I heard a sucker scream and shout
Niggas, Niggas, yea, cold turn the party out Hardcore to make the brothers act fools

Rap combat squares sat and I attack
Any crab MC that's down wit the wack
And I wreck and if I can not snap a neck
Throw a knock, I'll blow and look for a tech
I'm terror, new edition to rap era
I can't be beat, I'm too sweet plus clever
I'm smart, yes, I'm a so called genius
I'm equip wit the thinking cap they call
Keenison
Yo, wit that, I can break fool
Especially when the posse is thick and got tools
Make me feel good 'cause they got steel
No blasters or cap guns son, the real deal
K-A, microphone wrecker E-D
The O, the U, the B, the L to the E
Rocking on, word is born, so abandon ship
My name is Erick Sermon now want some and I'll flip
I'm far from a chump, I'm harcore like Brooklyn
Mess wit me and get your manhood token 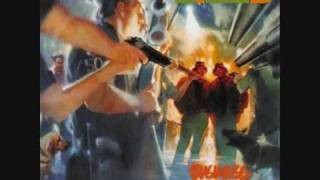