The Reverend had his wife done in by a guy I knew in
High School
He and a friend should do her in and make it look like
a robbery
"Here's money son, go buy a gun and shoot her in the
head
No one who dies, testifies, make sure that she is dead"
The heathens were paid a thousand bucks to eliminate
someone
Plus they were paid five hundred more to get themselves
a gun
The guy I knew had a hunting knife, "Why bother with a
gun?
She'll still be dead, why sweat details, as long as it
gets done"
The Bible said that Jesus bled for the sins of the rest
of us
The Reverend has his wife done in for fifteen hundred
bucks
They knocked upon the door and said their car broke
down
and asked if they could use the phone for a ride back
into town
They stabbed her several times and left her there for
dead
Bleeding and crying out and gasping for breath
and they went out the very next night and bragged about
it
The Reverend came home from work and found the Mrs.
dying
Life was falling from her grasp but still she lay there trying
No one will ever know what she told him or know what he
told her
Cause the Reverend did his wife in, fifteen whacks,
fireplace poker
The headlines screamed out "Brutal Murder, small town
preacher's wife"
The crime rocked all of Colbert County as each new fact
came to light
It seems the Preacher had a girl he counseled on the
side
Now the shit was coming down and she was scared to lie
The preacher came home from the funeral and found
Policemen waiting
The heathens, it seems, got coked up and drunk and did
a lot of communicating
Life is cheap for a couple of creeps but this here is
the smoker
Their prints were found all around the room but not on
the fireplace poker
The Preacher's son brought his father home and followed
him inside
Shots rang out in the Tuscumbia night. Was he alone
when he died?
"Don't call the son for questioning, that bullet was
deserved
Better call it suicide, justice has been served"
Better call it suicide, justice has been served 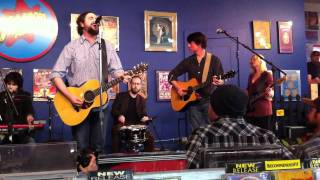