I watched the rain; it settled in. We disappeared for days again.
Most of us were staying in, lazy like the sky.
The letters flew across the wire filtered through a million liars.
The whole world smelled like burning tires the day John Henry died.

We knew about that big machine that ran on human hope and steam.
Bets on John were far between and mostly on the side.
We heard he put up quite a fight. His hands and feet turned snowy white.
That hammer rang out through the night the day John Henry died.

When John Henry was a little bitty baby nobody ever taught him how to read
but he knew the perfect way to hold a hammer was the way the railroad baron held the deed.

It didn't matter if he won, if he lived, or if he'd run. They changed the way his job was done. Labor costs were high.
That new machine was cheap as hell and only John would work as well,
so they left him laying where he fell the day John Henry died.

So pack your bags, we're headed west and L.A. ain't no place to rest.
You'll need some sleep to pass the test, so get some on the flight
and say your prayers John Henry Ford 'cause we don't need your work no more.
You should have known the final score the day John Henry died. 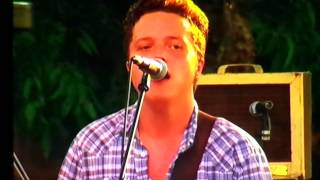