Loaded Gun In The Closet Lyrics

Loaded Gun In The Closet Lyrics

She had his breakfast ready every morning
and his lunch in a box sitting there by the kitchen door.
She’d make sure he had everything he needed
and hug his neck and tell him how much she loved him
and it was beautiful.
You should have seen it.

Then she’d make herself a pot of coffee,
just the way she liked it
and sit down and enjoy the quiet of the house all alone,
but, by two-o-clock or so every afternoon
the quiet would start getting to her and she’d watch
the clock until he came back home.

And she understood just what he needed
when he came home every evening
was a couple of beers and a couple of minutes
to cuss about his day.
So she’d fix him a nice hot supper
while he ranted and raved about one thing or the other. And she never once told him what he was going on about
didn’t add up to a thing.
And she never touched that gun in the closet.
It was his and it was there just because he wanted it to be.
She didn’t get out much, so she never knew just what it was
that made him so afraid.

Most women today would say she was a disgrace.
Most men would say she wasn’t much to look at.
And they all would say she’d be a lot better off
if she cared a little more about what they all think.
She could have a life of her own if she had a little pride,
some silicone implants, and another man on the side.
But she’s got a loaded gun in the closet.
And it’s there anytime she wants it.
And her one and only man knows it and
that’s why he put it there in the first place. 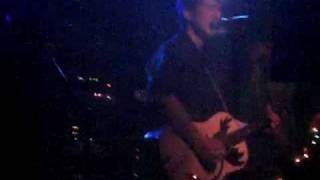