Prey is chosen, this ride is her last
Overpowered, she never had a chance
Now she's mine
There'll be no rejection this time
Suffocated, feel her die beneath my hands
Willing now, lying still as death
Now she'll stay
With the lifeless body have my way

Upon my knife, to be killed and raped
Taken home, her head and hands I amputate
Emiscerate
With her organs copulate
Flesh is sliced, to be cooked and eaten
Dissection, the body axed to pieces
In a mountain range
Buried in a shallow grave
Fulfilling dreams of mutilation
I take their lives - f*ck the dead
Eat their flesh - Chop off the head
Necrophile decapitator
Headless corpse I rape again
Disemboweled and dissected
Vanished to a gruesome end

Coming home, a hammer to the skull
Slit ear to ear, blood spurts from the jugular
Decapitated
Darts thrown at her severed head
Into the disposal, hacked out vocal cords are shredded
So long suffered, she finally lies beheaded
The slay her friend
I'll never hear them bitch again 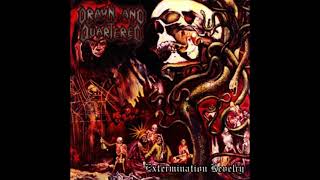