[Styles P]
Holiday Styles
Bitch, I get you shot in the head or shot in the neck
if I ain't gettin proper respect
I don't care if you rap, I still spit in your grill
I don't give a f*ck, never have, never will
If it ain't on your hip, then you're lookin to die
I ain't tryin to be the nigga that's gonna look at the sky
Ask God why I'm broke, bitch, I'm cooking the pie
We all gon' die, sooner or later, matter of time
My niggaz sell crack, with a package of dimes
Hundred or more, in front of the store, waitin to bubble
Brand new nine, and an eight in a bubble
I put sixteen above ya neck, I love my set
Niggaz think they a thug, then thug to death (uh-huh)
Cause the P gonna squeeze 'til no slugs is left (what)
You know I'm good with a hundred of 'dro, gun and an O
You think your shit butter? Hop in front of this toast

[Sheik]
Yo, aiyyo, aiyyo
I say what I want, f*ck what y'all think is cool
And I hate cops, cause most y'all was dicks in school
No p*ssy gettin niggaz tryin to cuff the God
Play Sheik out in the yard, but that shit too hard
My dough too long, nowadays, my flow too strong
What y'all make in a year, I kick that for a song
Check my car, I don't care, I don't play fair
Keep some shit in the stash box, then get me the chair
And it don't buck shot and the blast is hard to hear
I'm a true thug nigga, bring it straight to your crew
Small yell when I rap, I'm basically talkin to you
You see the pain in my eye? Nigga, the flame in my eye?
I'm tryin to leave my kids some real f*ckin change when I die
from rappin or tellin some cat to reach for the sky
I'm that hunt down nigga, with the four pound nigga
Bounty hunt your whole crew til my bullets go through, WHAT?

[Jadakiss]
Yo, yo, yo, yo
All I need is a big gun and a Coupe that's crazy quick
A nice house with five rooms, maybe six
A town where money is coming, eighty bricks
Break 'em down to all twenties, is a crazy flip
Bet you never even felt the heat
til I put the M1 next to your waves and melt the grease
Streets help niggaz; niggaz don't help the streets
Y'all use beats for help; we help the beats
Who want it with me? Who want it with Sheek? Who want it with P?
If I say so myself, it's a wonderful three
Be in the hood with all your jewels in the glovebox
Same niggas that-a rob you love L.O.X. (uh)
All types of burners, even snub glocks (uh)
Nice size tecs you could carry in your sweats (uh)
Find your man dead in the trunk of a car (uh)
It's Jada {*mwwaa*} responsible for breakin your heart (uh)
Uh

[Drag-On]
Creep through the streets
For some of y'all rappers, that's mighty hard Me the Security? Protectin my body? I let my shotty guard
Put chill pills in brains, bullets like Tylenol
Make niggaz drowsy from the blood loss, got em noddin off
And take casket naps, f*ck that
You shoulda never let this bastard rap
All I know is cold winter, hot slugs through your snorkel
No parents, tale from my horror's no morals
Raised in the wrong era, with no guidance
So you dyin? It's no problem, no lyin
Drag's fire; so ya hamburger beef? I french-fry 'em
Drag done ate your food
Like I know to raise your dukes so guard your chin up
Drag barrels, but shit, I spit-bubble your skin up
Drag scorch niggaz for dinner but season 'em well
I don't brag I let the streets tell
Po'-po' now you see he fell

[DMX] {*overlapping last line*}
Uh, uh, now you motherf*ckers
know what my name means when you hear it in the streets (uh)
Y'all bitches fear it cause you weak
You wanna hear it? I make it speak (WHAT?)
You ain't ever bust a gun, but there's a lot of greasy talkin (uh-huh)
What the science behind that son? (I don't know)
A lot of easy walkin
I bust shit down (uh) got down (uh) kick down (uh) shot down (uh)
Ain't tryin to talk about what I got now, but I got now (WHAT?)
I ain't never sold a brick, I done stuck niggaz up (c'mon)
And for talkin too much shit? I done f*cked niggaz up (uh)
It can get "Dark" for real, and I think you already know that (uh-huh)
Well think about it with the brick in your hand before you throw that
Now don't act, cause actin might get you rollin
with what you ain't ready to handle (UHH)
All that's left of your memory, is a candle (WOO!)
It happens quick fast nigga, to bitch ass niggaz
Talkin reckless behind your back, them kiss ass niggaz (uh)
From the rap shit to the street shit, I keep shit tight
Let them cats spit that weak shit (What!)
I'm DOG FOR LIFE! NIGGA! 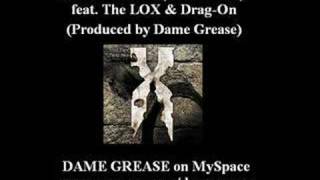