The Wild Colonial Boy
Dr. Hook
Sharing The Night Together Sexy Eyes Sylvia's Mother Hooked On A Feeling You Make My Pants Want To Get Up And Dance More Like The Movies That Didn't Hurt Too Bad A Little Bit More The Millionaire What About You
Official page Dr. Hook wiki The Wild Colonial Boy video Dr. Hook twitter

There was a wild colonial boy, Jack Doolan was his name
Of poor but honest parents, he was born near Castlemaine
He was his father's only son, and his mother's pride and joy
So dearly did his parents love their wild colonial boy

Barely sixteen years of age, he first began to roam
And found Australia's sunny shores, and called it his true home
He robbed the wealthy squatters, their assetts to destroy
A terror to the rich ones, was the wild colonial boy

Back in eighteen sixty one, began his wild career
With a head that knew no danger, and a heart that held no fear
He held the Mudgee mail coach up, and he shot Judge MacEvoy
A curse to every copper was the wild colonial boy

Later on that very day, as Jack he rode along
Listening to the kookaburras, pleasant laughing song He spied three mounted troopers, Kelly, Davis and Fitzroy
With a warrant for the capture of the wild colonial boy

"Surrender now, Jack Doolan, for you see we're three to one
Surrender now in the Queen's high name, or your living days are done"
Jack drew two pistols from his belt, and he waved them proud and high
"I'll fight, but not surrender", cried the wild colonial boy

Jack fired once at Kelly, brought him to the ground
Then turning round from Davis' gun, received his mortal wound
A bullet pierced his proud young heart, from the pistol of Fitzroy
And that's the way they captured him, the wild colonial boy

Yes that's the way they captured him, the wild colonial boy 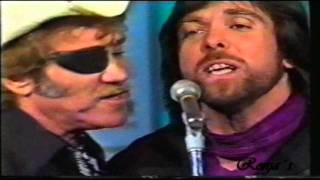