[T:] The lost eye for wisdom reads the runes
On which our fiery people writes his doom
[O:] Devotion proudly sails in the lake of blood
Drunk by the ground of the young and the old
[T:] Your allseeing eye is hight for men and gods
For whom wait the age of dark Ragnarok
[O:] But so many enemies will taste the hammer
Of the viking hearts fiery banner

[Chorus:]
In battle my fate I'll show
It's a rite long time known
For I am your son The wind brings my song
And you are of ravens the Lord
One Eyed God Ravenlord

Death, mist and cold plague the Niflhel
Naglfar the ship, made of nails of the dead
Sails silent and relentless, straight to that hell
There who didn't die in battle suffering will dwell
But to Asgard and Valhalla our fate is led
Because out immotrality won't serve it's queen Hel
But in the higher Asgard we will kindly stand
And with strength and glory 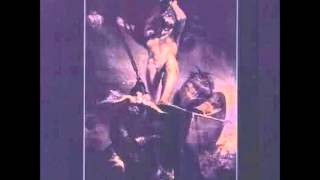 check amazon for One Eyed God mp3 download
these lyrics are submitted by kaan
browse other artists under D:D2D3D4D5D6D7D8D9D10