Villain man never ran with crills in his hand
and won't stop rockin' until he clock in a gazzillion grand
'Til he in the wasteland sands
raps on on backs of treasure maps. stacks to the ceiling fan
he'll rest when he's ashes. ask him after 10 miles and his goulashes mash his stashes.
Chip on his shoulder with a slip-on holster.
A clip, a folder, and his grip on a bolder poster
they supposed to know. It'll show when his aura glow.
Get from out the row. When he get dough: its horrible.
Time is money. Spend, waste, save, invest, the fest.
The tin case of (?)
yes. Y'all, don't forget ya trickles.
The best ballers pitch in. Rub to get a nickles.
When tut-tut. He about to change the price again
they go up each time he blow up, like, hydrogen.
Villian hear have 'em shrillin' in fear.
And Won't top-illin' until he a gazzillionaire.
Grill and stare. Yeah, ya boy had drama.
Got him on a mental plane; avoided bad karma.
Once sold an inbred skinhead a nigga-joke.
Plus a brand new chrome smoker with the triggers broke.
I thought I told him fire and pins were separate.
He'll find out later when tries to go and rep it.
Took her to hold the money for a Arabic Victoria.
Charged in advance to translate it and ignored her, sorta.
One monkey don't stop no slaughter.
A junkie wanna cop a quarter-ton; run for the border.
No the drill. It ain't worth the overkill.
Flow skill. Still, there's no thrill.
Villain puttin' 10k bills in his pilla.
Villain when it gets realer, split the scrilla with

Dilla, Dilla, mix, mix, mix.
Do a deal for kicks and get rich quick.
Sketch lyrics. Bet your bottom nick on some vick
Ick from the broomstick. Come with the dumb schtick.
Sick, slick. Hit it in the book.
Only way they find him is if he spittin' in the hook.
Listen, don't look now. Keep walkin'.
Traded three beads for this cow. Cheap talkin'.
Hawkman. Stalkin'. Hit the weed. Hawkin' often.
Cough into a coffin. Might as well scoff the pork, then.
He's like warf. Some say stronger, though.
Off the top Jay Strong Bo. Play along bro.
Wear a mask like YO, off the thong show.
Flow slow. He's a mongrel. Thon Won Thong Pro. (?)
For your info: when's he's not practicing Jim Crow or addressin' some nympho bimbo.
He's playing Ray J, the old tape.
Doom, well, what can I say like JJ in a gold cape.
Villain to the rim like Brim.
Villain and you won't find him in no gym.
Probably a foggy bar with the frogs
with the dot on a guard as he squat on a log.
Half-cocked and half-baked.
Used to keep a full stock of work.
Half-rock and half-shape.
My mistake. Sign the track agreement.
For more g's to to line than cracks in the cement.
In any event, its fake like wrestling.
Get 'em like Jake the Snake.
All massacres. He licks it for the dry throat.
Tryin' to hit the high note.
Villian, since an itsy bitsy zygote.
By remote, send in the meat wagon.
Braggin' MCs packed in with they feets draggin'.
These stats is staggerin'.
Had his PhD in Indiscreet Street Haggelin'.

Villain, his agenda is clear.
Endin' this year with dividends to spare.
Hear! Its not meant for the seein'.
Went through the ceiling after enterin' the centerbeing.
A new meaning to sales through the roof.
A guaranteed (?)
It's the return of the tramp.
Who do a duet jam when Earnest go to camp
for the right earn. "Nawmeen?" like Vern.
We need some more oil for the machines to burn.
Learn. Jiminy crickets. He gets lucky
like one-in-three tickets off slippery lyrics.
One man's waste is another man's soap.
Son's fan base. Know the brotherman's dope.
A real weirdo. With above-weird flow.
And the way his hair grow as ugly as a scarecrow.
He wears a mask so the charge won't grab.
On a rooftop with a large stone slab.
Heads up. Talk white and thought niggerish.
Refused to walk tight and got his off the figurish.
Black licorice and equally as yucky.
How he handled the money was strictly Dan Stuckey.
Monkey hustle. Man on fire.
Later for the date than the Hadron Collider.
Cost more. It be seeming like a style.
Doom leave the competition steaming like a pile.
Smile. *Ding* Sparkling jewels.
In effect like off to the side street park rules.
Fools. The roach is never dead.
Live for a weekend. dehydrate with a severed head.
Instead it was depicted a flickted.
Split the wicks lick.

We have got to find DOOM!
Gooood Luuuuck! 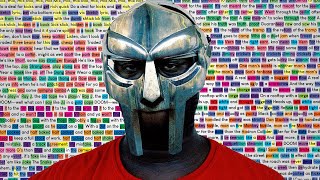