He said, "Balaam come and curse these Israelites
If you do I believe I could beat 'em in a fight!"
But when Balaam asked the Lord, the Lord said, "Balaam
don't you go
Israel is blessed by Me, don't you go mess up My show"
But Balaam's head was turned by the money he could earn
So he saddled up his donkey anyway

Balaam and his servants hurried off for the King of
Moab's castle
But they hadn't gone very far down the road when the
whole trip became a hassle
Because the donkey ran off across a field, then she
nearly broke Balaam's ankle
But when she lay right down and wouldn't get up Balaam
got a little more than rankled

For the third time Balaam beat her with his cane
But that donkey just refused to move again
It was the thing that happened next though, that made
Balaam's knees get weak Well, that donkey still would not get up but she began
to speak
She said, "Balaam you're to blame, the way you beat me
is a shame
'Cause all I've done is tried to save your life!"

Then the Angel of the Lord appeared with a flamin'
sword in his hand
Balaam fell down on his face, a very frightened man
The Angel said, "Balaam, you'd be dead if your donkey
hadn't detected
That I was waitin' there to part your hair when you and
my sword connected" 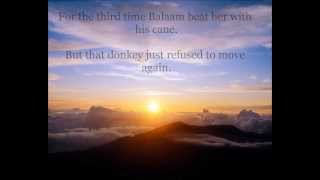