The huge explosion is explained on the news.
There has been a nuclear attack in the Middle East.
Nations turn from working together to national defense.
Final nuclear world war is breaking out.

The final battle has begun
A wanton war that won't be won
Mothers clutch their wailing child
The fig tree burns; their tiny cries can't be calmed

Whenever the wind blows for 7 years
Nothing can grow, everything dies
Littering roads with still glowing bones
Find one, you'd better leave it alone

Great cities fall one by one
All Leaders call “Johnny get your gun"! The little man takes the world stage
Still denying his deployment of the rage

The Snake snorts, spouting lies
The Eagle descends and plucks out his eyes
Overnight the world is changed
A viscous vengeance in the false prophets name

Radioactive the seven seas
Poison will flow, and ebb with the tide
Disrupted food chains all that is needed for life to
survive
Gone in the blink of an eye 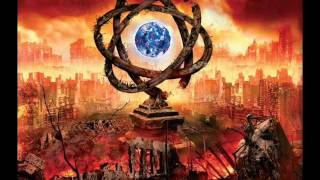 check amazon for King Of Terror mp3 download
these lyrics are submitted by kaan
browse other artists under D:D2D3D4D5D6D7D8D9D10
Songwriter(s): Not Documented
Record Label(s): 2010 Inside Out Music
Official lyrics by