Headlock On My Heart Lyrics

Headlock On My Heart Lyrics


Backstory:
Tabloid prediction: Dolly Parton will announce she's
falling madly in love with a 300 pound professional
wrestler. She'll write a song about their relationship
titled 'Headlock on My Heart' and feature her massive
muscleman in the video.

Dolly: Now this actually came out in this magazine.
Now, you folks I'm sure buy these every week at the
supermarket, right? And you know they never put
anything in these magazines that's not true, right? So
I figured since I was gonna fall in love anyhow, why
wait? So I went out and I found me a 300 pound wrestler
and I sat down and I wrote a song called 'Headlock on
My Heart' and I did a video. As a matter of fact, in
the same magazine on a page opposite, there was a
picture of Hulk Hogan. Now, I love Hulk Hogan. My
Daddy's crazy about him, so I called Hulk, I said 'Would you do this?'Cause the song is a fantasy, and
it's about a guy named Starlight Starbright. He said
'Aw sure, I'd do anything with you, Dolly!' I said
'Well, thanks, Hulk, I ought to hug your neck!' So
wouldn't that be something if me and Hulk really wound
up getting married? Watch this video...

The first time that I saw him
Was in a wrestling magazine.
Then I watched him on TV,
Then I bought a ringside seat.

His name was Starlight Starbright,
The greatest in the land.
He sprinkled stardust in my eyes
I was his biggest fan. 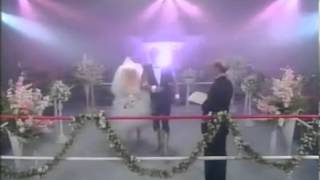 check amazon for Headlock On My Heart mp3 download
these lyrics are submitted by kaan
browse other artists under D:D2D3D4D5D6D7D8D9D10