I'm not bitter, just a little sad
To be taken in by a smile
That swallows everything in its path
Then spits it right back out again

Hollywood whispered your name
And called you a genius

Hollywood, whispered your name
And called you a genius and you believed us

I hope you're happy in this hole you've dug
Where the sun spins around you and only you
Don't you get a little scared sometimes that standing
In all that light might show you for what you really are?

Hollywood, tell me who's going to save you?
I will not stand in line just to praise you
I will not stick around to watch you go down
One more lost genius 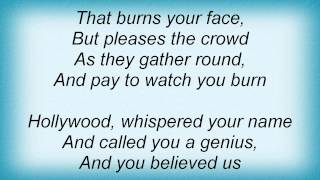