As I walked out one mornin' in the Alabama chill,
I saw some old friends hangin' from a tree on Hobie's
Hill.
By their tattered legs they dangled drippin' down along
the spine.
It was old George Gudger's overalls a-drying on the
line.

George Gudger, he's an honest cuss, and he likes to
work his land.
I'd long admired them overalls that I held there in my
hand.
My brand new pair was stiffer than a starched-up Sunday
suit.
But his could walk 'round by themselves and plow the
corn to boot!

Now the knees looked almost bloody from the red Hale
County clay.
George Gudger's debts and prayers had kept him kneelin'
down all day.

Old George owes me money, but I owe him my respect.
And if these overalls will fit me, Boy, I'll forget
about his debt.

I stepped in to them big old legs like fallin' down a
mine.
Then I heard a ragged chuckle, and there stood old
George behind.
A smile of old tobacco juice was tricklin' down his chin.
He said, "You might as well try walkin' round in
someone else's skin . . ."

"But son, if you like them old friends of mine so much,
I guess I can let 'em go
Had to lean 'em to me wife last year, while she's
carry'n Little Joe.
She bent down in the fields one day And split that
tired old seam
And now she gone and beat 'em half to death on that
rock down by the stream'

The knees looked almost bloody from the red Hale County
clay.
George Gudger's debts and prayers they kept him
kneelin' down all day.

You know I walked just like a drunken man, they almost
made me fall.
They kept tryin' to steer me back towards Gudger's
place, Cuz they're still Old George's overalls!

At home before the mirror I seemed to be a different
man,
In my mind they kept a seein' His farmed out patch of
land.
So I took him back his overalls and a week supply of
food,
I also left my brand new pair and sneaked home in the
nude. 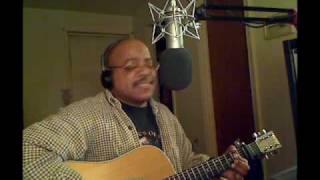