When To Stand Up Lyrics

When To Stand Up Lyrics

[Eminem]
Yo
At birth I was born with the biggest middle finger on earth
The first time I went to stick it up the shit hurt
Mom wouldn't take me, the bitch still hates me
One day she said, "Go rake leaves," I said, "Make me!"
I'm proud to announce i was probably the first kid
Who was kicked out of his house for making fart sounds with his mouth
Arguing with me and mom was on-going
She called law enforcement when I broke the law mower
The slut gave me a truck when I turned sixteen
I went to start it and it screamed, "Please fix me!"
Back then, when Will Smith was still the Fresh Prince
And him and Jeff were still best friends, I guess then
I decided to cut class to rap full time
And get the f*ck outta this fake shit school and rhyme
Anybody who thinks this f*ckin attitude is a gimmick
Come and see me, see if I don't live up to this image
Break shit!

[Parl Yams]
Yo, y'all rappers have never learned
That's why I'm f*ckin wit y'all
Run around telling niggas they can f*ck wit Parl
I bring it to your high school, smoke the prom
Put your brother in a headlock, choke your mom
Cause any horror like a play off loss in game seven
Walk around ripping on niggas madder than James Evans
My left hand's sharp it moves freestyle ultra
Slap my dick like Kool Keith
f*ck like you stole from me, and rules the streets
I don't wanna have to f*ck you up, so cool cease
Parl Yams be the chosen thug
What I spit be cold juice like a frozen hug Run the streets while you're stuck at home
My temper like Bushwick Bill, bitch leave me the f*ck alone
I've been jealous since niggas was windmillin'
These cats just started to rhyme, my pen's spillin'
Your moms just told me to act, I've been wheelin'
So boy just slow your deck, i've been stealin'
I wet rappers cause it's me and Em
I guess I just ain't give a f*ck like Eminem
Burglarize take busts with the slugs
Come in your window like (? ? ?) and bustin' your club
Put the heat up I teach them niggaz what to suck
And my young lords, when to stand up and light the Dutch

[Eminem]
I came to my last show with a horse swingin' a lasso
Drunk with the asshole ripped out of an old bathrobe
Cause I don't give a f*ck, you better understand that
Two Zantacs, I don't give a f*ck where SoundScan at
Billboard, drugs is what I kill for
I'm Happy Gilmore, just slip me anything in pill form
I may mingle but I plan to stay single
Play bingo and drink, get old and watch my face wrinkle
Sike, I'm 24 Thursday; six more birthdays
and I'm blowin my brains out when I'm thirty
As long as my heart beats I'ma keep tryin to see
How much speed I can eat before I fall the f*ck asleep
So "I'm the Rapper, He's the DJ"
I'm the one thats got the six year old nephew screamin "F/U/C/K"
So Jeff, give me a scratch (scratched: "No!")
The rest of y'all can kiss my ass 'til your lips stick to my pants 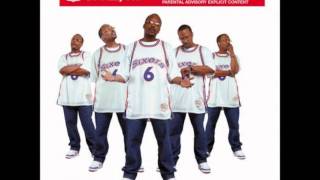 check amazon for When To Stand Up mp3 download
these lyrics are submitted by kaan
browse other artists under D:D2D3D4D5D6D7D8D9D10